A video made last year points out some peculiarities on Saturn’s rings. NASA scientist and author of The Ringmakers of Saturn claims there are huge spacecraft there, possibly hazardous towards Earth.

In accordance with some biographical records, Dr.Norman Bergrun spent 12 years working as a scientist at the National Advisory Committee for Aeronautics, the forerunner to NASA’s Ames Research Center, in the field of airplane thermal ice-prevention and roll stability laws for airplanes, missiles and rockets.

Another 13 years he worked at Lockheed Missiles and Space Company. He is an author of many books, including The Ringmakers of Saturn in 1986.

In this particular book, Bergrun examines some images of Saturn’s rings. These images were captured by the Voyager 1 and Voyager 2 space shuttles in 1980 and 1981.

The book talks about massive alien ships around Saturn, which Bergrun entitled to be “ring makers”. He also mentions these are the things responsible for the rings around the gas giant. 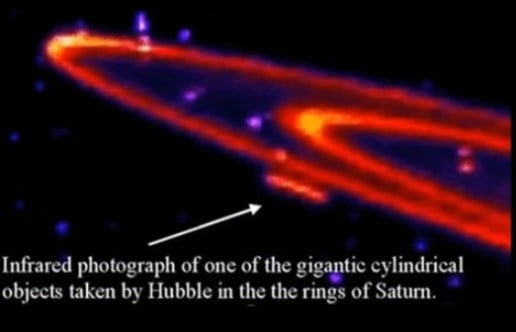 He further explains his theory that the rings were created by giant Electro Magnetic Vehicles, likely commanded by otherworldly creatures.

Further studies by him and others imply the same ships are also orbiting around the Sun, Jupiter and Uranus too.

A Cassini photograph which appeared depicts a weird “bend” in Saturn’s A and F rings. However, they came out to be an optical illusion from the planet’s atmosphere consuming light.

Bergrun has much respect as a scientist in his surrounding. He recruited many followers of his theories. The latest Mysterious Universe podcast’s Plus extension talks about his theory of black aliens.

The former NASA scientist has previously said that the quantity of spaceships has arrived on its “critical” level. He also said that authorities should pay attention to them.

Prominent UFO hunter Scott C Waring believes that Bergrun has spoken about one of the biggest secrets of NASA.