Remains from a miniature UFO crash in North Yorkshire from over 60 years ago have seemingly been restored in the repository of the Science Museum in London.

In 1957, The Yorkshire Post released a story about the Silpho Saucer – a mysterious disc discovered in Yorkshire. Soon enough, it became famous as the British response to the US-based infamous Roswell event.

It all started when the businessman Frank Dickenson and his two friends were driving up Reasty Hill, near the village of Silpho.

They slowed down their car as they witnessed a gleaming object hovering in the sky which eventually landed in the Borax Forest.

Mr. Dickenson found the metallic debris of the saucer. However, upon his return with a friend, the object disappeared.

He soon published a notice in the Scarborough newspaper and finally managed to buy the saucer for £10.

When they opened the object, they found a small book made of “17 thin copper sheets covered in 2000 hieroglyphs.”

Philip Longbottom, Scarborough café owner, examined the disc. According to him, the disc was shipped to Earth by an alien called “Ullo” while the message threatened: ‘You will improve or disappear’.

The miniature UFO measured only 17.72 inches in diameter and weighed 33.07 Ibs. For many years, UFO believers were questioning what happened to the tiny artifact.

Recently, its remains were recovered inside a cigarette box at the British Science Museum.

The parts of the Silpho artifact were sent to London in 1963 for study. The examination revealed the object involved “fused section of the metal and plastic from the outer casing, a length of hollow copper tubing and pieces from the copper booklet discovered inside.”

As BBC reports, the tests conducted at the time found that the artifact’s shell “contained lead and the copper parts […] of unusually high purity.” As a result, the UFO community became very excited.

However, a metallurgist said that the disc couldn’t have space origins since it wasn’t imperiled toward high temperatures.

Moreover, ever since it appeared, skeptics have doubted its genuineness. They insisted the object a fabrication created from a hot water cylinder in a garage.

In the beginning, the scientific society didn’t want to believe this object was a real space visitor.

Air Chief Marshall Lord Dowding, who led the RAF during the Battle of Britain during WW2 had another opinion. Upon his analysis, he concluded the saucer was a genuine object from space. 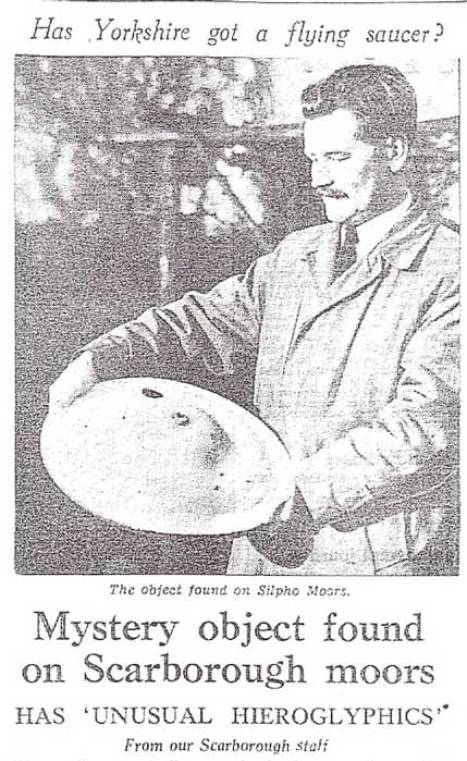