Hans Glaser was a German journalist from the early 16 century. He is famous for his wonderful yet peculiar woodcut illustration of the events of April 14, 1561, in the German city of Nuremberg. The work depicts weird objects in the sky and haze coming from fallen objects on the ground.

The woodcut came along with a description which we translated into English. Namely, it talks about round objects hovering in the sky and engaging in a fierce encounter over and over again.

“Immense smoke rose from the ground where the objects fell. Many of the objects were red, but there was also a “round ball of partly dull, partly black ferrous color,” and “something like a black spear, very long and thick, sighted; the shaft pointed to the east, the point pointed west.”

Mr. Glaser pointed out how numerous citizens of Nuremberg had the chance to observe this rather uncommon event. He didn’t know how to explain it and attributed it as a deed of God.

Even in the ancient times, people had doubts about whether UFOs are real or not.

Glaser wrote “Although we have seen, shortly one after another, many kinds of signs on the heaven, which are sent to us by the almighty God, to bring us to repentance, we still are, unfortunately, so ungrateful that we despise such high signs and miracles of God. Or we speak of them with ridicule and discard them to the wind, in order that God may send us a frightening punishment on account of our ungratefulness.”

Contemporary people also tried giving an explanation of the event depicted in the engraving.

In detail, they said the story Hans Glaser told might have been metaphorical or it could signify some sort of solar sensation.

Regarding the second account, they mentioned the sundog which you can see in the following photo. 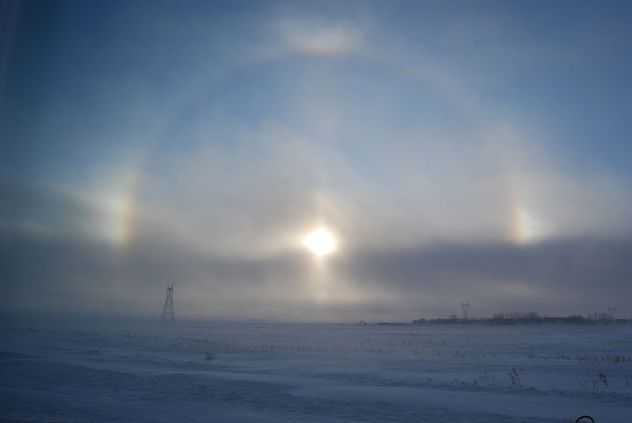 “Personally, it looks more like ‘Battle of the Gum Drops and Pez Dispensers’ to me,” wrote blogger Michael Heiser.

Read the whole translation of the woodcut here.