Local residents of Littau in Lucerne, Switzerland were terrified that alien intruders are spattering toxic chemicals in the sky after a bizarre object which released a brown death cloud appeared out of nowhere.

The unknown object that resembled a death cloud released a dense brown smoke. Many people saw the photographs of the event, yet, no one could explain its origin.

According to local media’s reports, one woman observed the weird object face-to-face from her kitchen window.

The woman, who wanted to stay anonymous, said that the object was not flying across the sky. Instead, she said, it was rigidly chugging out the smoke before disappearing into the sky, as she was filming it.

She told 20 Minuten: “The object with the tail just stood in the sky and it did not move for two or three minutes.”

As the witness further remembered, the object quickly set upright, turned to the right and vanished.

However, a short time after, the death cloud came back again, repeating the same eerie actions.

“But this time the phenomenon was not as long as the first time,” said the eyewitness.

The woman who lives on Benneneggstrasse in Littau reported that the weird object then shoved off towards Neuenkirch.

Unlike many others, the woman doesn’t believe she was a witness to a UFO invasion, despite what she saw was beyond staggering. Instead, she tried to give some rational explanations.

At first, she thought it might have been a meteorite, however, this theory didn’t match the immobility of the object. 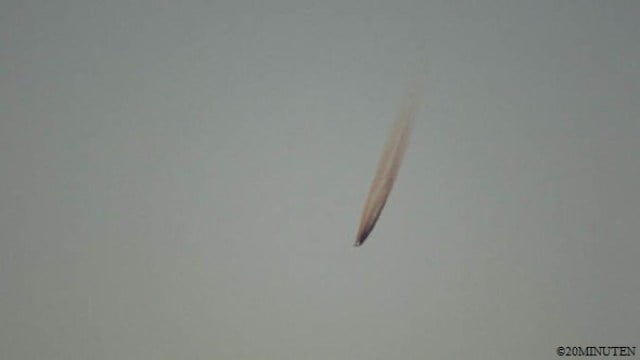 Press spokesman Vladi Barrosa who also saw the pictures, confirmed that up until this moment, Skyguide considers this object to be a UFO.

He said: “In technical jargon, this is a UFO, so to the present state of knowledge it is an unidentified flying object.”

“We always get such pictures sent. In general, we can answer what’s on it. If we have date and time of day, we can use radar images to find out what was in the sky at a certain point in time.”

Some UFO experts who examined the pictures explained that the death cloud could, in fact, be an erupting airplane engine. Others said it was an airplane trail shaded brown from the sunset.

What do you think this weird thing is?