The Tic Tac UFO sighting which took place back in 2004 is one of the most famous events when it comes to this sensation. Namely, an unknown object was ambushed and chased by U.S Navy Hornets. However, the public only found out about it last year through the secret Pentagon program dedicated to UFO phenomena.

The Pentagon released an official report in which concluded the following:

The UFO was capable of camouflage itself, appearing invisible to the human eye.

The object showed incredible act, however, it didn’t have lifting structures or control surfaces necessary for a common flight.

The object had unknown origins and expressed such technology the US or any other countries didn’t possess.

In the past few years, many UFO documents have appeared on the surface. Along with them, the public came aware that the governments had spent a significant attention to their study and explanation.

Not so long ago, many media outlets including our website published the story of Pentagon’s secret program. In particular, the program was devoted to the threats posed by UFOs.

“It takes off like nothing I’ve ever seen. One minute it’s here, and off it’s gone,” pilot David Fravor, who was flying one of the fighter jets that day, told the New York Times.

The most exciting was the encounter of a UFO with two fighter jets along with a video.

“The UFO was reported to be ‘an elongated egg or a Tic Tac shape with a discernable midline horizontal axis”. It was “solid white, smooth, with no edges. It was “uniformly colored with no nacelles, pylons, or wings.” It was approximately 46 feet in length. The F/A-10Fs could not obtain a ‘lock’ on the AAV; however, it could be tracked while stationary and slower speeds with the Forward Looking Infrared (FLIR),” said the report.

The AATIP released many reports. Among them was a curious one which described a white, oval object that was further chased by two F/A 18F fighters off the coast of California in 2004.

The event became famous as the Tic Tac UFO event. It involved an unknown object which was moving at an incredible speed yet with no means of propulsion.

The document had 13 pages, it was prepared by the military. George Knapp’s intrepid I-Team, which is part of Las Vegas CBS affiliate Channel 8’s Newsroom, published it. Moreover, this channel investigated the 2004’s event.

You can see the whole document here.

The report explains how the anomalous air vehicle spotted by two pilots dropped very fast from about 60,000 feet to about 50 feet in only a few seconds. 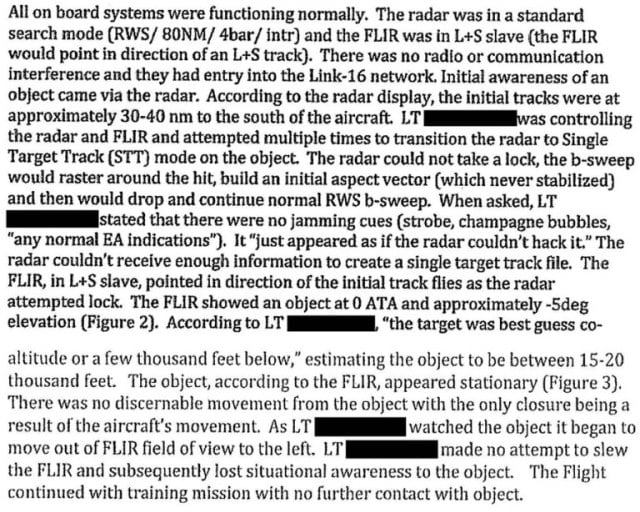 In particular, this UFO was able to reach an “advanced acceleration, aerodynamic and propulsion capacity.”

The Report has six conclusions.

The pilot reported how a “disturbance appeared to be 50 to 100 meters in diameter and close to round” and “reminded him of images of something rapidly submerging from the surface like a submarine or ship sinking.”

“It is possible that the disturbance was being caused by an AAV, but that the AAV was ‘cloaked’ or invisible to the human eye,” the report ends.
“At no time did they consider the AAV a threat to the battle group. Finally, they had never seen anything like this before and never again.”