Aliens are such a vivid topic of discussions, while the possible alien abductions sound even fierier. There are so many stories about people who claim to have experienced an alien abduction and along with these stories also go the so-called alien implants.

What exactly are these small yet weird devices? Do they really exist? If someone ever proves their genuineness, they will certainly mean the ultimate proof of alien existence.

Throughout the years, we have been hearing stories of UFO sightings and alien encounters. Some of them remained mysterious even though, while some were debunked.

Some of these claims were backed up by photography, however, much of it has been questioned regarding its authenticity.

Indeed, when it comes to UFOs and extraterrestrial life, physical evidence is the most important thing in order for one to believe.

There is so much so-called official data available about the UFO phenomena. Thanks to the numerous reports, the whole world now has knowledge of different kind of stories that have something in common.

More lately, even some governments made progress in the process of UFO disclosure. They published a broad quantity of top-secret documents about the UFO sensation.

A short time ago, the space agency NASA assembled many scientists, theologians, philosophers, and historians to decide how to prepare the Earth for a potential alien contact. Under alien contact, they mean intelligent beings and microbial organisms as well.

But, back to alien implants, we are going to mention some of the most bizarre things people who said were abducted showed on their body. Namely, all of them shared strange marks and extracted implants on their bodies.

Extracted implants, if ever verified 100% authentic, could be the utmost material to serve as evidence of alien existence.

Dr. Roger Leir supposedly is the person with most experience in the extraction of alien implants. According to him, he conducted 17 surgeries in which he extracted miniature things of mysterious origin. 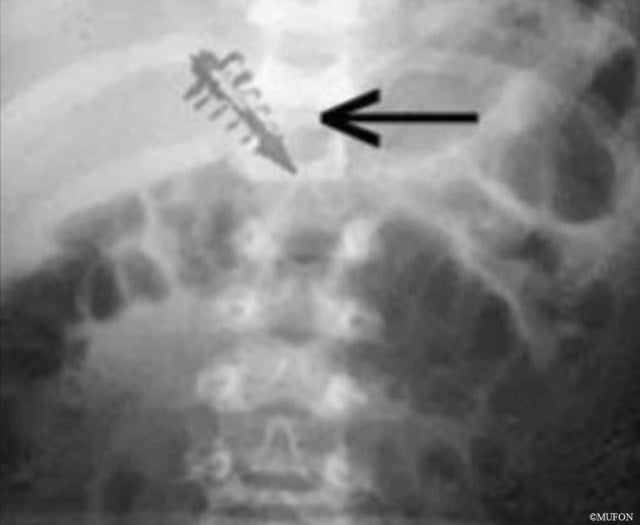 Dr. Leir said that these incrustations were in the size of a pencil point and had magnetic features. Allegedly, some of them even transmitted radio frequencies

The rest of the objects had meteorite fragments, such as gallium, germanium, platinum, rhodium, and ruthenium.

Alex Mosier, a Ph.D. in Philosophy, Chemistry, and Physics, studied the parts together with Leir. According to him, the fibers within were very similar to carbon nano-tube, implying they had been a subject of someone’s design.

He said: “You would not find these things in nature. They have to be processed, they require complex engineering, and they are not easy to manufacture.”

As described by MUFON.com, the extracted alien implants and the individuals underwent a set of tests a few years after the surgery.

Allegedly, these implants were extracted from the first series of surgeries. Two different pathologists further investigated them. After this, they sent them to several independent laboratories for a thorough scientific review.

These tests went on in the National Institute of Discovery of Science (NIDS), New Mexico Tech.

“The findings of these implant surgeries are highly unusual. In all these cases, there was virtually no inflammatory response,” said Dr. Leir.

The results from the pathology test of the first two surgeries unveiled that the metallic objects had a very dense, grey membrane. Moreover, this membrane consisted proteinaceous coagulum, hemoseridin, and pure keratin.

In particular, blood protein and skin cells are usually present in the skin’s surface.

Also, biological cocoons covering the implants carried nerve proprioceptors. These are nerve and pressure cells of the inaccurate tissue sample for that part of the body.

The implant cocoons also revealed to be bright green with illuminated with an ultraviolet light.

Dr. Leir said that the people from whom he took out the alien implants had no visible scars on their skin.

Leir died on March 14, 2014, due to a foot injury. Hence, his research did not move on as a result of the low budget.

Until now, the field of scientific medicine feared to perform tests on people who claimed to have experienced alien abductions.