The Curiosity Rover sent back pictures that are rather shocking. They depict what seems to be an armored alien soldier observing the Rover. Could NASA be in danger?

During the search within the NASA images taken by the large explorer, the owner of YouTube channel Paranormal Crucible made an unusual discovery. Many people agreed this adds up to the rest of the evidence suggesting Martian life does exist.

Standing among the dust on the Martian surface, there is clearly a figure that strangely resembles an alien soldier wearing combat armor. He further seems to hold something that looks like a gun.

The weird character doesn’t seem to be a living being but rather a stone figure that has managed to survive the Red planet’s severe timetable.

If it’s really a statue, it definitely means something. Its threatening appearance and resistant position stand up for his possible war features. 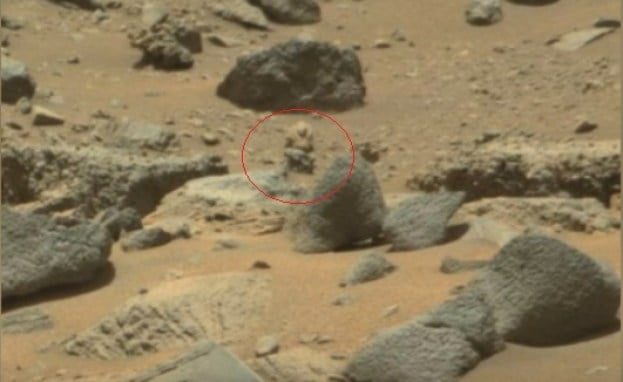 For those who didn’t know, in Roman mythology, Mars was the god of war and the Solar System’s fourth planet was named after him.

Did our ancient predecessors know something about Mars that got lost in the course of time? Or its name was just a coincidence?

“This intriguing object looks artificial in nature and in my opinion, is an ancient statuette,” says the video description.

“The odd thing about this one is that it does resemble an alien grey or possibly an insect type species of alien.”

This rebel discovery has encouraged alien believers to claim ancient aliens did exist on Mars. Skeptics, however, believe this is only a pareidolia pretext.

As we have explained before, pareidolia is a psychological phenomenon where the human brain is tricked to see common shapes where there aren’t any. For instance, clouds always remind us of different animals or objects.

In particular, rocks exposed to erosion and the time pass often end up resembling faces. If the rock is more complex, there is a higher possibility to see a covered face.

This phenomenon could explain many eerie sightings on Mars. But also, it could be a cover-up the authorities want us to believe.

Numerous UFO experts are sure that we are not alone in the universe. They believe Mars holds many things that are inexplicable by rationalization.

“It’s a bipedal species that has a uniform on. The alien soldier is wearing a suit and carrying some weapon of sorts. The important question is, is it a statue, or was this person turned to stone by a gruesome, yet powerful weapon?” he wrote on his blog.

Dramatic depictions such as statues can certainly add up to the opinion that life once existed on the Red Planet.

But seeing the petrified remains of an alien soldier forever standing in combat position would be something totally different.

His stand seems like he was ready for some kind of an event, but he was stopped by something ending up freezing.
If we actually believe this case scenario, then numerous unanswered questions will pop up like popcorn.

Was all this the result of a catastrophic accident? If so, did it completely annihilate the allegedly existing Martians?

Another case scenario would be the energizing of a weapon able to petrify all those it was aimed at.

When here, remember the ancient Greeks’ Medusa? Maybe she had Martian origin? Or she a comparison to weaponry.

The ancient alien soldier concept is definitely something that opened up the vision of all UFO enthusiasts.

One thing or other, there is no chance we can ever discover the truth behind the strange things photographed by the Rover. NASA, of course, doesn’t sustain the alien theory, claiming they are all just rocks.