Besides the fact is also illustrating giants, dragons and cannibals, the left corner of a mysterious ancient map of America, depicts what it seems to be a mermaid holding a flying object.

The mermaid can be seen in the left corner of the ancient map, near Tierra del Fuego. It’s an archipelago off the southern point of the South American mainland, across the Strait of Magellan.

Americae Sive Quartae Orbis Partis Nova Et Exactissima Descriptio is an ancient map by Diego Gutiérrez and Hieronymus Cock. It was published in 1562 in Antwerp.

The map: A New and Most Exact Description of America or The Fourth Part of the World, includes the eastern coast of North America, the whole Central and South America and portion of the western coasts of Europe and Africa.

This map depicts abundant information about the American continent. It further contains six organized sheets.
It measures large 93×86 centimeters which makes it one of the largest map of America.

Moreover, it remained as the greatest Spanish map of America before the mid-eighteenth century.

Currently, there are two existing copies of the map. One is located in the Library of Congress in Washington, D.C and the other in the British Library in London.

The map was official since Philip II, King of Spain approved it.

It portrays the Spanish power in the new world, establishing the boundaries of the authority’s field of Spain. It also recognized the French and Portuguese residence in the continent. Therefore, there are three layers of arms on the map. 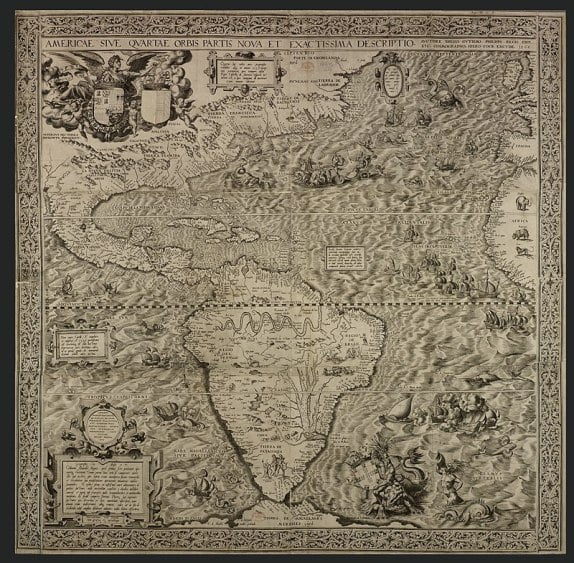 In the down right part of the map, in the Atlantic Ocean, the authors laid the layer of arms of Portuguese crown. Next, they put two layers of arms in North America. On the left, it was the Spanish empire and on the right, the French crown.

Even though a latitude scale lacks from the map, the Equator and the Tropics of Cancer and Capricorn are visible. Hence, the distance between these latitudes can help to define the distances of the whole map.

Drawings of parrots, monkeys, mermaids, sea monsters and giant Patagones are the finishing touch of the numerous rivers, mountains and capes.

The map precisely identifies the presence of the Amazon and Paraná river basins, Lake Titicaca, the location of Potosí, Mexico City an Florida.

Anyway, in addition to everything else, this ancient map also depicts a couple of strange things too.

The Patagones are mythical giants that arose in the first European descriptions on the coast of Patagonia region.
Experts assume that the source of the myth could be relying on the Tehuelche tribes from that area.

The first reference to these fictitious people is the story of Fernando de Magallanes’ trip around the world.

In this text, the author claimed to have noticed them on the southern coast of South America in the year 1520.

Antonio Pigafetta, one of the few survivors of the expedition wrote this about the supposed giants:

“The captain-general sent one of our men to the giant so that he might perform the same actions as a sign of peace. Having done that, the man led the giant to an islet into the presence of the captain-general. When the giant was in the captain-general’s and our presence, he marveled greatly and made signs with one finger raised upward, believing that we had come from the sky.”

“He was so tall that we reached only to his waist, and he was well proportioned. His face was large and painted red all over, while about his eyes he was painted yellow; and he had two hearts painted on the middle of his cheeks. His scanty hair was painted white.”

“He was dressed in the skins of animals skillfully sewn together. That animal has a head and ears as large as those of a mule, a neck and body like those of a camel, the legs of a deer, and the tail of a horse, like which it neighs, and that land has very many of them.”

“His feet were shod with the same kind of skins which covered his feet in the manner of shoes. In his hand he carried a short, heavy bow, with a cord somewhat thicker than those of the lute, and made from the intestines of the same animal, and a bundle of rather short cane arrows feathered like ours, and with points of white and black flint stones in the manner of Turkish arrows, instead of iron. Those points were fashioned by means of another stone.”—(Diary of Pigafetta, pp. 51-52).

Most likely the weirdest part belongs to the left part of the map, near Tierra del Fuego. In particular, this section depicts what seems to be a mermaid holding something like a flying saucer.

The mermaid observes a ship going towards the coast of today’s Chile. In her right hand, she holds an object that strongly resembles a flying disc. 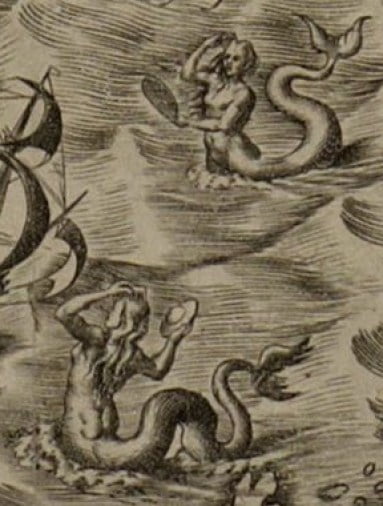 This disc really looks like something that modern-day people would describe as a UFO. But is it really?

Just above this mermaid, to the right of the ship, we see another mermaid overlooking the ship and holding in her left hand an oval-shaped object.

However, this object might be a mirror, as the mermaid is drawn touching her hair while looking at the object.

Regularly, mirrors don’t look like flying saucers. However, it’s pretty plausible she is holding an object that is a mirror or some object of the same kind.

The creators of this ancient map combined real places with mythological elements. Whatever the object is, is definitely a mystery.

One thing or another, it’s quite interesting to see how people imagined America more than 500 years ago.