Sixty years have passed since the discoveries of the excavations at the Qumran Caves which revealed around 1,000 ancient manuscripts regarding the human past. One of them was the Book of Giants connected with the demise of the Nephilim.

The Bible itself makes a few notes in the book of Genesis concerning the Nephilim. However, the majority of knowledge for these giants comes from the legendary Book of Enoch.

This ancient Jewish religious piece credited Noah’s great-grandfather, but some researchers say various parts of it date back to 300 BC.

Enoch is clearly one mysterious character, to say at least. The book of Genesis tells his 365-years life on Earth before God took him.

While he was on Earth, our planet was also hosting ‘angels’ who communicated with humans with no restraints.

Eventually, they mixed with humankind and gave birth to a race of unusual giant hybrids called Nephilim.

The origin of the word Nephilim is still unclear but researchers have mentioned multiple derivations. Among them, there were “the fallen”, “apostates” or “those that cause others to fall down”. Nevertheless, since always, they symbolized a race of giants. 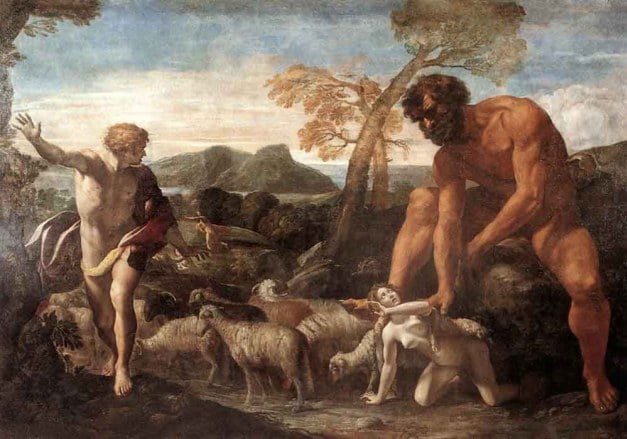 The Qumran Caves’ discovery of the Book of Giants offers a distinct insight into the life of the giants than the Book of Enoch.

Despite it was half-done, its fragments managed to paint a rough picture of their life.

The Nephilim became conscious that their violent behavior threatens them an unavoidable destruction. This scared them to ask Enoch to speak for themselves in front of God.

The manuscript begins describing how the Nephilim had a deviant way to treat anything that lived on Earth. But, they soon started having predicting dreams of their doomsday and feared for their life.

First of them to have such a dream was Mahway, the Titan son of the angel Barakel. Namely, in his dream, he saw a sinking tablet into the water.

When the tablet emerged, all three names were washed away. This signifies the Flood and the consequent destruction of all but Noah’s sons.

At the beginning, they weren’t aware what the dream of Mahway meant. But soon, other two giants, Ohya and Hahya, started having comparable dreams. They saw an excavation of a tree, except for three of its roots.

Soon after, all of the giants started having prophetic dreams:

Thereupon two of them had dreams and the sleep of their eye fled from them, and they arose and came to […and told] their dreams, and said in the assembly of [their comrades] the monsters […In] my dream I was watching this very night [and there was a garden…] gardeners and they were watering […two hundred trees and] large shoots came out of their root […] all the water, and the fire burned all [the garden…] They found the giants to tell them the dream…”

The Giants finally understood their dreams were actually apocalyptic and sought help from Enoch.
But sadly, Enoch vanished from the face of Earth so the Nephilim chose one of them to undertake a cosmic journey and find him.

[Mahway] mounted up in the air like strong winds, and flew with his hands like eagles […he left behind] the inhabited world and passed over Desolation, the great desert […]and Enoch saw him and hailed him, and Mahway said to him […] hither and thither a second time to Mahway […]The giants await your words, and all the monsters of the earth. If […]has been carried […] from the days of […]their […] and they would be added […] we would know from you their meaning […] two hundred trees that from heaven came down…”

Unfortunately, fragments of the script were quite damaged, but the in general, the meaning of the text is clear.

So, can we metaphrase flying “with his hands like eagles” and hypothesize Mahway took off from Earth on a spaceship? In this case, does “desolation, the great desert” refer to interstellar space?

Enoch sends Mahway back to Earth with the promise he’ll speak to God. Sadly for the Nephilim, the tablets Enoch sent back did not bring good news:

The scribe Enoch […] a copy of the second tablet that [Enoch] sent in the very hand of Enoch the noted scribe […In the name of God the great] and holy one, to Shemyaza and all [his companions…]

Let it be known to you that not […] and the things you have done, and that your wives […] they and their sons and the wives of [their sons] by your licentiousness on the earth, and there has been upon you […and the land is crying out] and complaining about you and the deeds of your children […] the harm that you have done to it.

[…] Until Raphael arrives, behold, destruction [is coming, a great flood, and it will destroy all living things] and whatever is in the deserts and the seas. And the meaning of the matter […] upon you for evil. But now, loosen the bonds binding you to evil…] and pray.”