The 1,000-year-old stone structure in Mexico named Tetzacualco is a real picture of how ancient Mesoamerican civilizations imagined the Earth was created.

Tetzacualco locates in the foothills of a volcano, in the middle of a fishpond.

Ever since the 16th century, this place has been a hotspot for amateur researchers as well archaeologists. They spent a lot of effort examining the structure and its origin.

The formation measures around 37.7 x 32.2 feet and has stones within its construction.

Iris Del Rocio Hernandez Bautista, an archaeologist from Mexico’s National Institute of Anthropology and History, is the leader of the newest strike of excavations regarding this place. 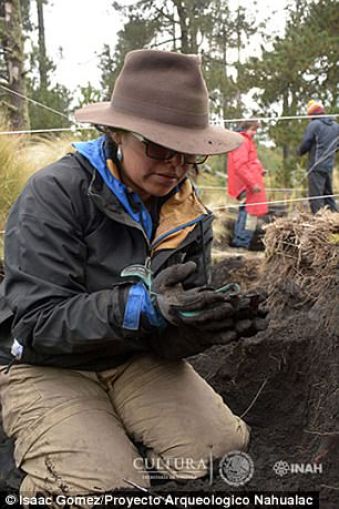 Namely, this new research of Tetzacualco has an intention to be more intense from the ones until now.

Bautista’s crew’s initial discoveries suggest that at the site, they found ceramics and stone artifacts older than 1,000 years.

Moreover, they found proof that ancient Mesoamericans tried to flood the pond where Tetzacualco is located in order to secure it will never run out of the water.

According to the evidence they gathered by now, Hernandez has a theory that the large size of Tetzacualco and the position it is located has a particular meaning.

She applies its location in the middle of the pond means it represents a mythical being – Cipactli or Çipaqli.

Mesopotamian legends say this creature is fish monster which the gods used to create the Earth.

One account of this fable dates back to the 16th century, from the Spanish priest Andrés de Olmos.

In detail, it claims that four gods “made the water and created in it a great fish similar to an alligator which they named Çipaqli, and from this fish, they made the Earth.” (translation by Henry Phillips Jr.)

Some media published information saying the Aztecs created this site. The Aztecs were a Mesoamerican culture that thrived between 1300 and 1500.

However, the artifacts suggest the structure was built at least 300 years from another, still unknown Mesoamerican culture before the Aztecs.

“The existence of a Tetzacualco (shrine) in the middle of a natural pond and the optical effect that occurs when the water mirrors, from which it seems that the structure emanates, suggests that the place is the representation of a primeval time and space, a miniature model of the universe,” the researchers said.

Currently, it’s not clear how long this structure was in use nor what kind of ceremonies went on there.

The Mexican writer, Juan Bautista Pomar, had a mixed Spanish and Mesoamerican lineage. He said that in the 16th century, Tetzacualco’s was a place of children sacrifices.

Furthermore, he mentioned this place had a statue that showed Tlaloc, a Mesoamerican god of rain. He described this god as having his face towards the east.

According to him, people usually carried children sacrifices to him once a year.

Until the present day, the team has not discovered human remains at the place; however, excavations are in constant progress.