Ever since mankind started getting interested in the universe and the possible otherworldly life, there has been a question whether there is an existence on the Red Planet? Now, Curiosity caught a mysterious creature on its surface that points out that ultimately, there might be a life out there.

It is not even the first time Curiosity to snap something rather bizarre. This time, it was an incredible photo of a mysterious creature that inspired a deep discussion about a potential life on Mars.

Many people believe that the actual life of Mars hides below the Martian surface and not above.

This image of NASA’s Curiosity rover had inspired nothing but questions between the researchers whether Mars could be the host of aliens.

Of course, many of you who read this immediately start being skeptical. For all of you, this is the natural file image.

Anyway, the strange picture appears to depict a mysterious creature dangling onto the rocks on Mars. At least that’s how it looks like to us.

If you can’t spot it, just zoom over the center-right part of the picture, where the odd thing will obviously appear eye-catching.

Rationalists explain there are peculiar rocks on Mars that might look like creatures. But seriously, this doesn’t look like something that is a rock. But even if it is, it is definitely the strangest rock existing on the Red Planet.

The object seems to own ten weirdly grown ‘tentacles’ coming out from the center of its oval-shaped structure. 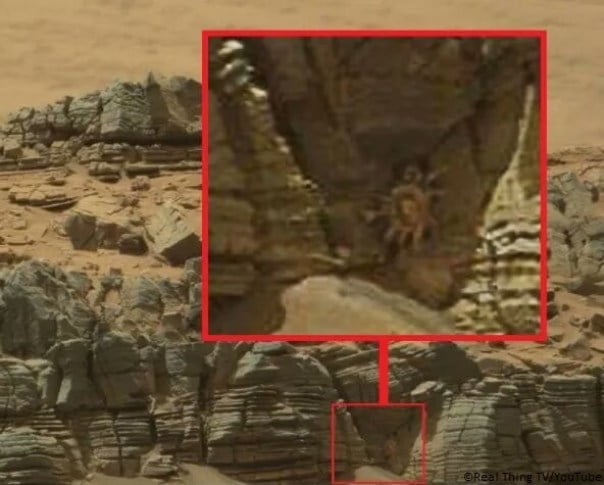 Curiously, many people who saw the image think that this mysterious creature is, in fact, securing some kind of a door to an underground tunnel on Mars.

Although it sounds way too far-fetched, you cannot stop but wonder about it. Could it be real? Could it be not?

Whether it is a rock or not, this image undoubtedly excited the lots of people who care about what is going on at the surface of Mars.