The newly elected president Donald Trump signed a directive at a convention in the White House. The directive involves support for the administration’s work to promote space investigation

The space exploration particularly consists sending US astronauts back to the Moon and even more – to Mars. The president said his order will “refocus America’s space program on human exploration and discovery.”

At the convention which took place in The White on December 11, the President said: “Imagine the possibility waiting in those big beautiful stars if we dare to dream big. That’s what our country is doing again, we’re dreaming big.”

Since 1972, The USA hasn’t sent an astronaut further than low-earth orbit.

As he says, this mission’s initiative is to take Americans back to the Moon and furthermore, to the Red Planet.

The President named Jim Bridenstine to be the new administrator this September, however, it’s yet to be approved by the Senate.

The President apparently signed two forms to accelerate space exploration. In June, another form restored the National Space Council, an advisory board out of order for 25 years.

Vice President Mike Pence, who will be part of the re-established National Space Council, said: “Our space program needs new leadership and a new vision.”

This order shows the administration is moving forth to establish that power.

To the Trump’s signing ceremony for the directive joined former lunar astronauts Buzz Aldrin and Harrison Schmitt and current astronaut Peggy Whitson, who spent 665 days in orbit, which is more time in space than any other woman in the world. 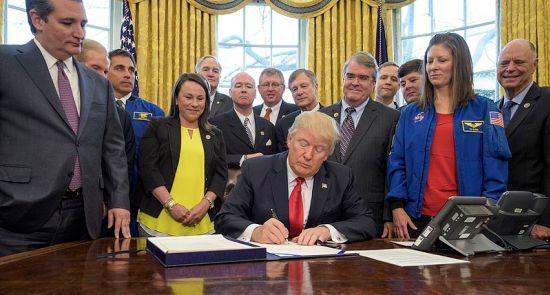 The ceremony also emphasized a moon rock, old around 3.8 billion years. This moon rook was gathered by Schmitt’s Apollo 17 mission in 1972.

“NASA looks forward to supporting the president’s directive strategically aligning our work to return humans to the Moon, travel to Mars and opening the deeper solar system beyond,” said current NASA Administrator Robert Lightfoot in his statement.

Could this directive be one of Trump’s public’s attention distractions?

One of Trump’s biggest promises during his campaign was making America a major force in space exploration.

However, the public challenged Donald Trump’s general ever since his election. His performance has been irked with rumors that seem to get worse with the time.

Some people say this order is just a game of diversion for the public, to avoid the other scandals.

With this directive, Mr. Trump drops the plans hatched by his forerunner Barack Obama, to send humans to an asteroid near earth.