Antarctica is much more than ice in the middle of nowhere and we have realized that on many occasions. Now, it appears it’s a land of giant ice cubes? Our question is how these formations arose in the Antarctic ice which is intact of humans?

The picture above is named “Icy Sugar Cubes,” and was taken in Antarctica in 1995.

The British Antarctic Survey examined the photo which was originally taken on Kodachrome 64 slide film. Also, in 2017 it won the top prize in The Royal Society’s annual scientific photography competition.

However, this image is more than we really know, in accordance with what the glaciologist Ted Scambos says. He was the leader of the National Snow & Ice Data Center science team as well.

The photo appears to represent an area of “fast-flowing and floating ice,” Scambos wrote in an email to Live Science.

To the naked human eye, the Antarctic ice looks pretty much thick and solid. But, in fact, the ice is in perpetual movement, running, crashing and rubbing against each other.

That movement is the cause of patterns which appear due to the long period of training.

“A massive slab of flowing ice begins to go afloat and initially because it is very thick, it spreads laterally [side to side], creating deep along-flow troughs. Later, with the further flow, the ice begins to stretch out longitudinally, and the surface snow breaks perpendicular to the first troughs,” said Scambos.

To put it differently, as the ice expanses and thins, it breaks.

In the beginning, the cracks seem to coordinate to the ice’s movement, making a set of horizontal gaps. Later, another set of cracks appears vertical to the ice flow’s path, making the weird grid of giant ice cubes.

The image offers hints that can encourage researchers like Scambos to figure out the direction in which the ice was moving. 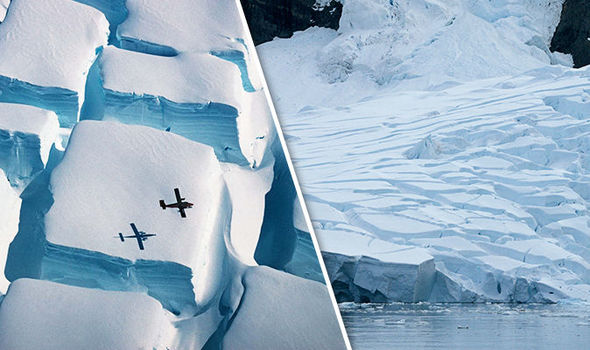 “Note that the troughs that run more perpendicular to the aircraft are a bit older, more full of snow — I would guess that they are parallel to the flow direction,” Scambos wrote.

Those slobs, however, have been there a long time now, and snowstorms covered them up.

“The sharper cuts to make the blocks, more in the direction of the plane’s flight, are younger, and mark a transition someplace just upstream to more extensional conditions,” Scambos said.

In general, the ice was probably running along the direction of the shallow slabs, and the deeper slabs appeared lately.