The Welsh Mountains UFO event, also known as the Welsh Roswell, happened in 1974 and since then gained popularity as one of the most famous UFO stories in the world.

Around 8:30 p.m. the inhabitants of Llandrillo and Llandderfel, two neighboring villages, were staggered by a huge explosion.

Uncertain of what happened, people ran to their windows and in the streets to see what is going on. As the many of the reports said, the sky was full of green and other colored lights.

Many inhabitants said that allegedly, they have been seeing mysterious helicopters in this area. Others reported they had visits from strangers which from their account could be the “Men in Black” often linked with UFO events.

A soldier who wanted to stay anonymous also said that he allegedly took boxes with alien bodies to the Chemical and Biological Defence Establishment at Porton Down.

However, according to the scientific research, this event was caused by a large earthquake brought together with sightings of a bright meteor over the Welsh Mountains.

But, not many people believe in this story. Ufologists claimed that a UFO crashed in Welsh Mountains, while the British Government covered it up.

During the event, the Institute of Geological Sciences measured a 3.5 earthquake at 8:38 p.m in the north Wales area.

Despite the explanation which involved meteors and earthquakes, witnesses still didn’t buy this theory. In fact, they were rather convinced they have seen a UFO in the sky.

Nick Pope, a former Ministry of Defense employee and a ufologist said that the UFO remains were probably carried to RAF Rudloe Manor.

Now, after a long time has passed since the event, a mysterious map appeared. This map allegedly shows the path of the flight of the UFO that struck in the Welsh Mountains. UFO researcher Russ Kellet made this map go viral. 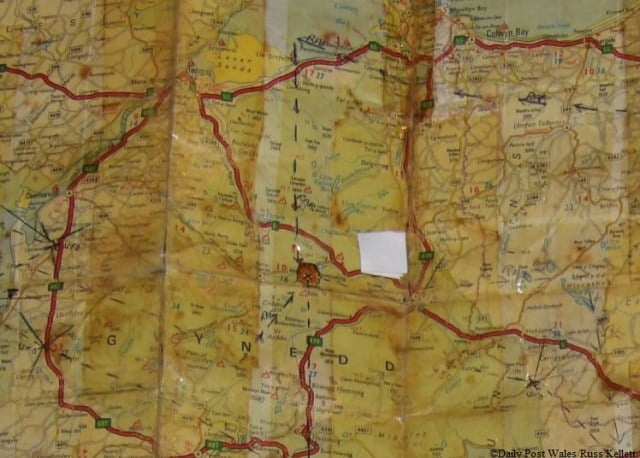 Kellet claims that the witnesses of the event provided him this map. As Metro reports, on the of the observers said he saw a UFO on the hillside.

He said: “I saw a bright red light, like coal fire red. Large perfect circle. Like a big bonfire.”

As Kellet claims, he took this map from five witnesses. The plan has a red dot which shows where the event happened. The black dotted lines heading to the dot from the west depict the path of RAF jets and the UFO, according to Metro.

“The five saw a strange object and got out to have a look, but the military were there and told them to leave,’ Mr. Kellett said. They moved to a better position and started to take photos. They were all friends and four were in the military during World War Two. Afterward, they started doing their own research and the map is a result of what they found out and shows the flight paths.”

“It was very strange and I was a little bit spooked. I’ve carried the map around for a long time as part of my research. I’m getting older now and just wanted to put it out there to see what people make of it and if there was anybody else who could shed light on what happened,” said Kellet.