The three Bosnian pyramids have always been a fiery topic of discussion. The Pyramid of the Sun, as the largest among them all, is even 60% taller than the legendary Great Pyramid of Giza. While many say these pyramids are nothing more than a natural formation, others claim there is evidence they are, in fact, man-made.

A crew of scientists conducted a study on the Bosnian pyramids. According to their inquiry, these impressive structures are older than 24,800 years and consist of sandstone conglomerate blocks. This material is known to have been used by ancient Romans as well.

The pyramids were discovered back in 2005 near the town of Visoko, in Bosnia and Herzegovina by Semir Osmanagic. He also happens to be the leader of the excavation process.

According to him, the external walls were built from specific conglomerate blocks. However, they got wrapped up soil and vegetation as many years have passed since their abandonment.

Osmanagic also said that the Bosnian pyramids are adjusted with the Earth’s cardinal points and indicate to the stellar north.

“Although tens of thousands of pyramids have been discovered across the planet, none have the construction quality and date back as far as the ones in Bosnia,” Osmanagic stated.

“Bosnia is the original pyramid, the oldest and largest ever constructed. It has an exact zero degree North orientation and is potentially the key to releasing information about ancient technology that can free the world of its dependence on fossil fuel.”

Mr. Osmanagic is sure that the area where the pyramids locate is full of unusual electromagnetic appearances.

He said that he has spotted an energy emission with a radius of 15 feet and a frequency of 28 kHz from the peak of the largest Sun pyramid.

He added that this emission occasionally comes along with an ultrasound with a radius of 33 feet. 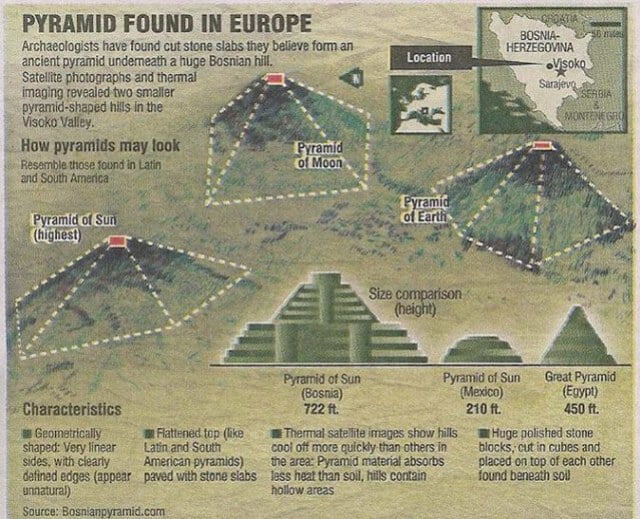 People have reported detecting similar beams radiating from numerous other pyramids around the globe. So, the inevitable question is it possible that these pyramids were power generators erstwhile in the ancient past?

Osmanagic’s claims still ought to undergo a scientific review in order to accurately solve the puzzle of the Bosnian pyramids.