NASA’s Earth Observatory has spotted a series of strange ice holes in the Arctic sea. These mysterious arrangements have baffled the scientists who can’t seem to find a solid explanation for what force has created them.

On April 14, NASA scientist John Sonntag took a photo of the ice holes during NASA’s yearly Operation IceBridge mission. They were located about 50 miles northwest of the Mackenzie River Delta in Canada.

In particular, this mission’s goal was to map changes in sea ice at Earth’s North and South poles.

“We saw these sorta-circular features only for a few minutes today. I don’t recall seeing this sort of thing elsewhere,” Sonntag said in a NASA press release.

The fact is the ice holes are there, in the Arctic Sea, however, we don’t know any details about them. Neither we are familiar with their size, their origin and if they will ever disappear. We don’t even know if they are a normal thing or an exception.

Nathan Kurtz, another scientist, said he doesn’t know how these holes appeared. He added he hasn’t seen anything similar in his whole career.

Other researchers implied that seals might have created the ice holes. However, the analysis of the images indicated animals couldn’t possibly create such big holes.

Don Perovich, a sea ice geophysicist at Dartmouth College, said that the images show there is young ice developing on the place that was once an area of “open water.”

“The ice is likely to thin, soft and mushy and somewhat pliable. This can be seen in the wave-like features in front of the middle ‘amoeba,’” Perovich told NASA.

He added that there is a “general left-to-right motion of the new ice,” as can be seen by “finger rafting” on the “right side of the image” issued by NASA.

The NASA images show a phenomenon dubbed as ‘finger rafting’ which happens when two icebergs slam into each other. Hence, they slide above and beneath each other, just like meshing fingers. 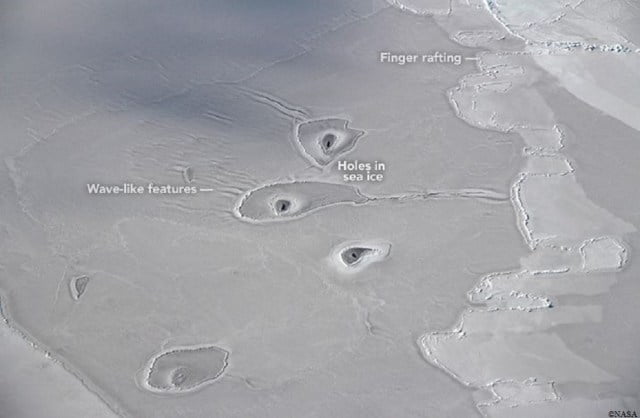 “It’s definitely an area of thin ice, as you can see finger rafting near the holes and the color is gray enough to indicate little snow cover,” Kurtz said, according to NASA.

The experts also added that they aren’t certain what kind of dynamics could have shaped semi-circle formations around the holes.

Another scientist, Walt Meier, from the US’ National Snow and Ice Data Center believes that the explanation for the holes is the way the water moves over the snow and ice, causing the snow to wash away.

Chris Shuman, a University of Maryland at Baltimore County glaciologist has another opinion.

“This is in pretty shallow water generally, so there is every chance this is just ‘warm springs’ or seeps of groundwater flowing from the mountains inland that make their presence known in this particular area.”

Another likelihood, according to Shuman, is that warm water from Beaufort flows out of the Mackenzie River. This water, he says, finds its way to the surface as a result of its interaction with the bathymetry.