NASA published space images which revealed an extraordinary ancient bridge which locates in the Palk Strait, between India and Sri Lanka. The 30-kilometer bridge was named Adam’s Bridge and it’s made of a train of limestone shoals.

This ancient bridge has an uncommon shape and composition. Its lifetime confirms that humans made its construction.

Archeological findings and legends confirm the first human inhabitants in Sri Lanka date back to the primitive age, around 1,750,000 years ago. Interestingly, this is the agedness of the bridge also.

This piece of information is actually very important regarding the legend called Ramayana. Namely, this legend origins from Tredha Yuga, more than 1,700,000 years ago.

This saga makes a reference to an ancient bridge, built between Rameshwaram (India) and Srilankan coast. 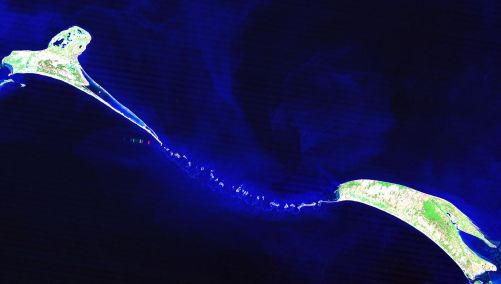 It further explains the bridge fell under the surveillance of a figure called Rama – the embodiment of the supreme.

According to ancient legends, King Rama made a bridge between India and Sri Lanka more than a million years ago. Some people compared the satellite images and believe this ancient bridge represents residues of it.

Hindu legends say the bridge’s purpose of construction was to transport this figure. He was the hero of the Ramayana and his mission was to save his wife Sita from the demon king Ravana.

Archaeologists might not have taken these facts very serious. However, it definitely is a very interesting insight for the people interested in learning ancient history and Indian mythology.

Dr. Badrinarayanan, former director of the Geological Survey of India studied core samples from the bridge and furthermore said:

“We found marine sands on top and below that was a mixed assemblage of corals, calcareous sandstones, and boulder-like materials. Surprisingly below that up to 13–16 feet, again we found loose sand and after that, hard formations were there,” he said.