During the ending phases of the World War II, the infamous party of the fascists created a top-secret technology so-called the Nazi bell which supposedly allowed Hitler and his associates to travel into space.

The obscure Nazi Bell, many said, could take the Third Reich to the lunar surface, Mars and far-off star systems. In order to do so, it used a baffling gravity-defying propulsion system, claims the conspiracists.

The theory further claims that the Nazi leader – Hitler, required this technology to be produced as a top-secret.

John Goforth and Brent Hand from the Hysteria 51 podcast said: “As the walls begin to close in Hitler puts even more resources into his Wunderwaffe or Wonder Weapons.

“The prize of the lot? A bell-shaped machine potentially capable of destroying everything and everyone in it’s path or perhaps even altering time itself.

“But what happened to this secret Nazi project? Did it actually even exist?

“Was Hitler on the verge of using the Nazi Bell to change history forever and if so, where is it now?”

This Nazi Bell is famous as Die Glocke in German. Supposedly, many prominent scientists worked on developing it, under the supervision of SS General Hans Kammler.

There was a German documentary in 2014 which claimed that the Nazi Bell was originally created as a secret weapon to fight against the advantages of the Allies. 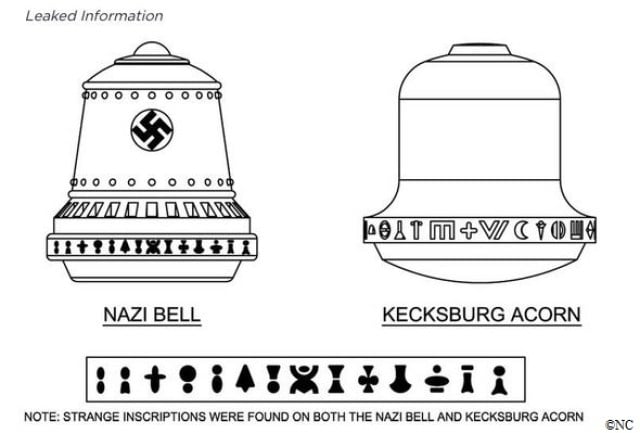 According to the theory, the device had a bell shape and it measured three meters in diameter. It consisted of copper-colored material known as light metal, or ’leichtmetall’.

Allegedly, it worked by using a mysterious red fuel. According to author Henry Stevens, this fuel was actually red mercury.

After the Third Reich capitulated, allegedly, the US took the secretive technology.

The documentary also mentioned the likelihood that the Roswell Incident wasn’t, in fact, a UFO cover-up but the crash of a Nazi-era flying saucer.