After being buried for over 130 years, researchers think they reawakened the eighth world wonder that was deemed to be lost.

But, let’s go back to the start of the story. In the year of 1886, a catastrophic volcanic eruption happened at Lake Rotomahana on New Zealand’s North Island.

The eruption triggered a chain reaction of numerous bursts and floods of lava. When the eruption was coming to an end, experts calculated it freed such an energy which was equal to the largest nuclear weapon ever discharged – the Tsar Bomba.

Among the disastrous consequences this event produced, was also the disappearance of a divine natural structure famous as the Pink and White terraces or the eighth world wonder. 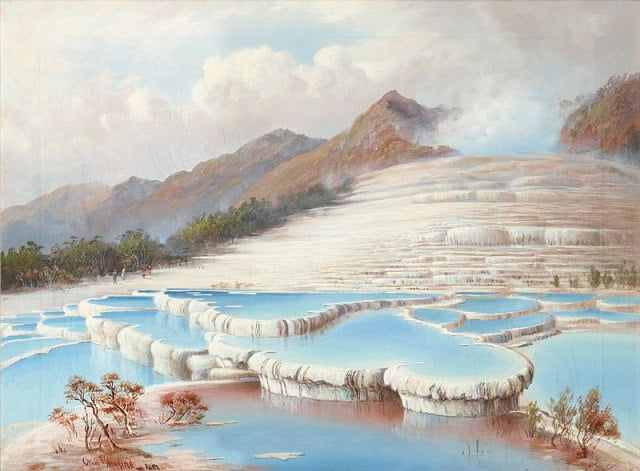 Back in the mid 19th century, this formation was a global fascination. Tourists all over the globe were going to New Zealand to observe it and bath in the fountains.

Experts believed that The Pink and White Terraces were about 1,000 years old while their hydrothermal system was over 7,000 years old.

“The terraces became the greatest tourist attraction in the southern hemisphere and the British empire, and shiploads of tourists made the dangerous visit down from the UK, Europe, and America to see them,” said Rex Bunn, one of the researchers.

“But they were never surveyed by the government of the time, so there was no record of their latitude or longitude.”

These terraces were the largest and most beautiful of their class. However, experts now believe they are not off-track forever.

As scientists noted, they weren’t pushed to the bottom of the lake but instead, were buried on its foreshore.

In order to secure an approximate groundwork of the terraces, researchers applied field diaries of German-Austrian Geologist Ferdinand Von Hochstetter. These notes carry descriptions of the terraces on their location before the eruption of 1886.

“Our research relied on the only survey ever made of that part of New Zealand and therefore we are confident the cartography is sound. Hochstetter was a very competent cartographer,” Bunn wrote.

“We want to undertake this work in the public interest. And I have been closely liaising with the ancestral owners of the land. The Tuhourangi Tribal Authority are supportive and delighted with the work,” he added.

Scientific research found that the terraces broke off into three fragments. Furthermore, they didn’t locate at the Lake Rotomahana, but instead, around other geothermal springs.

Bunn strongly feels that the terraces are not entirely destroyed, but as a matter of fact, in a fair state. He thinks that with some efforts, they could regain their old beauty again.

Curiously, this isn’t the first time the researchers to believe they found the eighth world wonder aka the terraces.

Back in 2011, with the help of unmanned submarines, they explored the bottom of the lake. They’ve said they found some remnants of the terraces on the lake’s floor.