And finally “dry as dust” it gets its real meaning.

The Atacama desert (Spanish: Desierto de Atacama) located in Northern Chile, is the driest desert in the world. And if the baren lower slopes of the Andes aren’t included the Atacama desert proper occupies 105,000 square kilometers. Periods of up to four years have been registered no rainfall in the central sector. Evidence suggests that the Atacama desert may not have had any significant rainfall from 1570 to 1971.

Except for fact that the Atacama desert is the driest at the whole world, there is one more thing that makes this rare lonely place even more attractive. That’s one hand that comes out from the blanket made of sand. Wave at The Hand of the desert (Spanish: Mano del Desierto). Don’t ask yourself is it God’s or nature’s miracle. It is a monumental sculpture created by Chilean sculptor Mario Irarrazaal in the 1980’s. It is a sculpture made out of iron and cement and it is placed at Atacama desert as a beautiful giant gemstone. The hand sits roughly 75 kilometers or 46 miles outside of the city of Antofagasta.

The giant cement hand rising out of the sand is 36 feet long. The sculptor made this piece of art to the human rights, violations that have plagued Chileans throughout their history – a powerful message encapsulated in an impressively large sculpture. With this significant masterpiece, the desert so empty but so full at the same time. The hand waves to tourists and road-trippers on the way to nowhere. 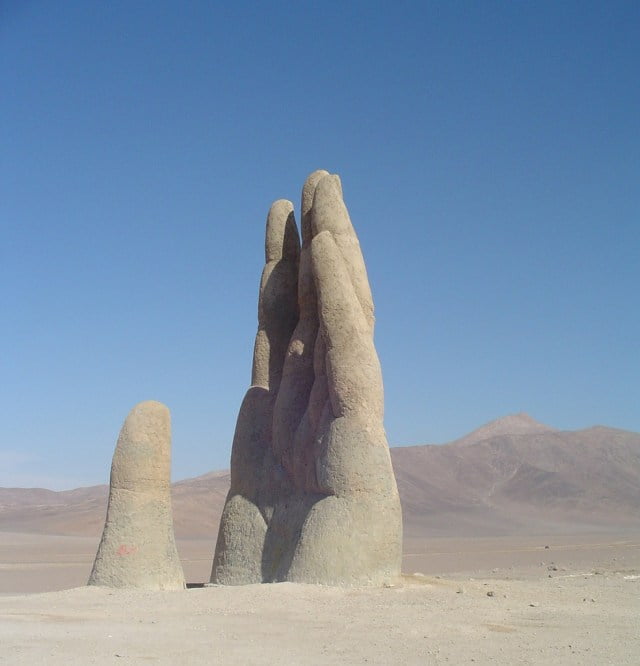 Due to some visits by tourists and unknown citizens and the remote location, “Mano del Desierto” it becomes a frequent target for vandals armed with spray paint. But the local citizens leave nothing to the circumstances. They must wash hand before returning to work. And no… not only their hand, The Hand of the Desert too. Twice a year, group of people, citizens of Antofagasta are gathered as volunteers to scrub away six months worth of names and Spanish profanity. Clean and beautiful The hand of the Desert gives you a five!

Mario Irarraazal didn’t stop here. There’s a right hand as well and it’s a continent away. He sculptured the left hand a decade earlier in Uruguay. There, 1200 miles away, on the east of Antofagasta in the Atlantic coastal resort of Punta del Este, four concrete fingers and a thumb rise from the sand of the beach. The author called this sculpture Man Emerging to Life but locals call it Monument to the Drowned or just The Hand. Between the two hands, it’s as if a subterranean giant is holding all of South America in its stone grip.