Who built the underground City of Derinkuyu?

The worldwide known region of Turkey – Cappadocia it has magical beauty not only on its surface but also in the bottom. Every part of this region is magical. Above ground, there are ancient volcanic stone chimneys, known as “fairy chimneys”. There are no words to describe this excellence. Оr as someone once said: Cappadocia – it looks like Mars but it’s in Turkey. Over the years, generations and cultures have changed, but they all contributed to the unique appearance and structure (in and out) of these chimneys today. The “fairy chimneys” have very impressive architecture.

But Cappadocia is not just what we see on the surface. In the heart of Cappadocia lie hidden places. Also, it has beauty inside, within, like a human being you know. The underground city of this region number about 200 and they are spread across the entire region. It’s assumed there could be more lying below the surface, waiting to be discovered. Of all the underground cities discovered so far, the most interesting story brings the city of Derinkuyu. The city was discovered by accident. when a local family decided to renovate their home. Suddenly a wall gave way to reveal a room and passage that led to this underground network. Derinkuyu it’s like a huge building.

According to some research, it is on 11 floors or levels descending about 280 feet, with an area of a little over 4 miles squared (10.4 kilometers squared). Inside there are many chambers for everyday activities, tombs, temples, living quarters etc. This underground city can also be connected to other local underground networks as well as wineries, underground water well systems providing fresh water, and a security system made up of enormous stone doors that can close the city from the inside. Each section, or level, can be separated from the following. Heavy stone doors could close Derinkuyu from the inside in order to fend off intruders, and each story could be shut off individually. 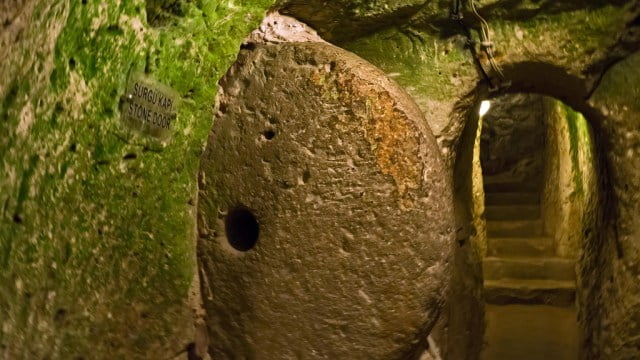 The most frequent guests throughout the years are tourists and archaeologists. The place by itself it’s safe considering its solid structure. The underground rock is very strong. Despite the good structure of the stone, there are no signs of the existence of any cave-ins. Furthermore, the engineer of this masterpiece had a good knowledge of the stone, stonework, architecture, and the local geography.
And the real question is: Who built this underground kingdom and why?

It is really difficult to determine the age of the structure. Furthermore, there is no recorded documentation of the construction and the people who lived there moved over the years. Common assumptions are that they are built by the early Christians but later research has shown that early Christians were only temporary residents. According to UNESCO, the first signs of monastic activity in Cappadocia date back to the 4th century, at which time, acting on the instructions of Basil the Great, Bishop of Caesarea, small anchoritic communities began inhabiting cells dug into the rock. It is believed that these underground premises were mostly refugee shelters.

There are many theories about who built the underground city. There are beliefs that the caves were constructed by the Persian King Yima. But in fact, he was more a mythological figure than a real king. The story of the king Yima is similar to the story of Noah in the Bible: The king built an underground city on the orders of the god Ahura Mazda, to protect his people from a catastrophic winter. He collects pairs of the best animals and people as well as the best seeds in order to reseed the Earth after the winter cataclysm.

The story of the ‘winter’ it’s in fact maybe the period of the ice age. And the last ice was between 110,000 to 10,000 years ago. The diverse labyrinths, so many floors and security doors point to the fact that these rooms are built to protect something or someone. The most impressive fact is that the network would have taken an immense amount of time to construct without advanced tools. The mystery of who built these underground networks is huge and heavy as the rolling stones on the doors of Derinkuyu.