Swedish scientist Peter Lindberg and his Ocean X Crew of nautical explorers found a mysterious object that looks like an alien ship on the Baltic sea’s floor. Experts later named it as the Baltic Sea Anomaly.

During their dive hunt in the Baltic Sea, between Sweden and Finland, they discovered the mysterious object, now famous as the Baltic Sea Anomaly.

As they were nearing the target, their side-scan sonar suddenly stopped functioning.

Stefan Hogerborn, a professional diver from the team, said: “Anything electric out there, and the satellite phone as well, stopped working when we were above the object, then when we got away about 200 meters, it turned on again.” 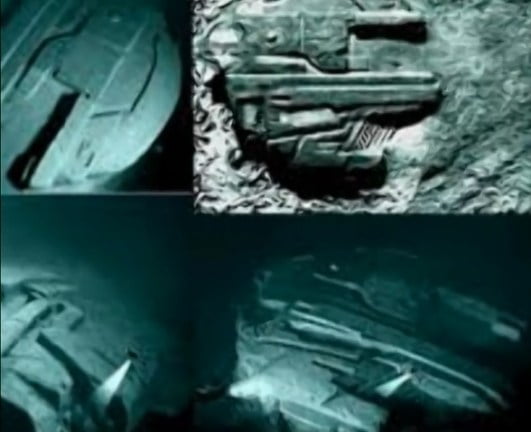 According to Ocean X, the anomaly, which really resembles an alien ship, looks like a spherical “rough granite”.
It’s thick around 3 to 4 meters and measures around 60 meters in diameter.

Moreover, it stands on an 8-meter tall pedestal-like thing, in a depth of 85 to 90 meters.

The anomaly has a metal construction and it’s around 140,000 years old. If we consider this theory true, the Baltic Sea Anomaly would have been developed during the Ice Age.

The divers gathered a sample which underwent an analysis. Results showed the object included limonite and goethite.

Curiously, these are metals that Israeli geologist Steve Weine claims can’t be naturally reproduced in this form.

On the other hand, Swedish geologists Fredrik Klingberg and Martin Jakobsson said the structure of the samples are commonly present in the seabeds and they can actually be formed naturally.

However, sonar tools detected drag lines behind the object, and Weiner says according to his tests, the formation is not a geological structure.

A professor of Geology at Stockholm University, Volker Bruchert, also examined the stone samples. According to him, the samples chiefly consisted granites, gneisses and sandstones.

Furthermore, he also discovered a rare fragment of basaltic (volcanic) rock, which is not a usual thing for this seafloor.

He stated these rocks were likely transferred by ice glaciers since the Baltic area sometimes experiences a strong impact of icy processes.

Some people believe the Baltic Sea Anomaly is actually a remaining part of a World War II Nazi anti-submarine craft.
Others, on the other hand, believe it could be an impaired gun blister from an old battleship.

Göran Ekberg, marine archaeologist at Maritime Museum in Stockholm, considers this anomaly to be a geological formation.

He admitted that as a point of fact, this discovery is really unusual. Particularly because of its spherical shape.
Other experts have asserted the formation might be a pillow basalt, a ridge of a hydrothermal aperture.

However, the most controversial claim about the Baltic Sea Anomaly likely was the belief it has an extraterrestrial origin. Namely, some people thought it’s an alien ship that fell into the Baltic Sea.

All of the answers different experts gave apparently seem to confront each other. By now, there hasn’t been a new piece of information or test results to solve the mystery.

Denis Asberg, a member of the Ocean X team, said that they have talked to many geologists and marine biologists, who all confirmed they had never seen anything similar to the Baltic Sea Anomaly.