The ancient city of Teotihuacan is not an everyday landscape. Besides being a notable archaeological complex, its design, when observed from the air, curiously reminds of a computer circuit board with two large processor chips.

Teotihuacan is one of the earliest Pre-Columbian cities in the American continent. Created by an unknown civilization, the perplexing city was discovered eaten by vegetations when the ancient Aztecs arrived.

As excavations show, the formations in this city have an unusual quantity of Mica, which further deepens the mystery.

The name of the city comes from the Nahuatl Teōtihuācan, or the “place where men become gods,”. Simpler said people acknowledge it as the city of gods.

The Nahuatl origin of the word was put to use by the Mexica, Aztecs, in order to distinguish this city that a previous civilization already built. When the Mexica arrived here, the city was in wrecks.

Up until today, the original name that the civilization-constructor give it to the city is still unknown.

Many reasons set Teotihuacan under the wraps of a huge mystery. We only know it was one of the most important cities in the American continent. The rest of it is an only a blurry, uncompleted image. As a matter of fact, researchers still analyze the real origins of the city.

Near the outset of the Christian era, the city of the gods was only a village. However, it was a place that gained in popularity as the capital of devotion in the Anahuac valley.

The first significant structures most likely formed at that time, as excavations performed at the Pyramid of the Moon confirmed it.

The city increased its reputation during the Classic Period, 3rd to 7th centuries AD.

During that period, the city was an extensive commercial and political link. It reached an area of around 21 km2, with a population varying from 100,000 to 200,000 citizens.

All the region of Mesoamerica sensed the power of Teotihuacan. Discoveries around Tikal, Monte Alban and other sites prove they had a connection with this the city of gods.

Researchers are uncertain of the ethnic identification of the first inhabitants of this city. However, among their assumptions are the Totonacs and the Nahuas.

The most recent theories imply that Teotihuacan was a cosmopolitan city where diverse ethnic groups were thriving.

Before the Spaniards arrived in Mesoamerica, the city was a long time deserted.

Even the few accounts we have in our historical sources do not reveal proper information about the first inhabitants but rather only those who lived after its downfall.

The Nahua sources of Bernardino de Sahagún believed that this city was the point where the gods assembled to give a surge to Nahui Ollin, the Fifth Sun according to local mythology. This period is inherent in the contemporary age.

As reported by colonial sources, the Nahuas believed that quinametzin built by the city. They were a group of giants that populated the world during the previous era.

The pyramids were believed to be large tombs of the Gods – creators of the city. Moreover, the city was a holy place, where after death, men became gods.

Archaeologists claim the advanced layout of Teotihuacan puts forward that the ancient founders had knowledge of architecture but intricate mathematical and astronomical science as well.

One of the most amazing things, that distinguishes this city from the others is that an aerial image of it presents it as a circuit board with two large processor chips. In this case, the chips are the Sun Pyramid and the Moon Pyramid. 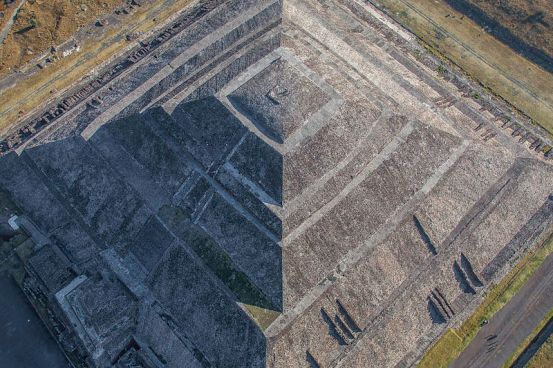 The fact it resembles a modern computer isn’t the only thing that is weird. A large amount of mica found in the monuments is also abstruse.

This mineral is located 3,000 miles away in Brazil. It is present in almost all of the structures and temples around the city.

Mica is solid when displayed to electricity, light, humidity, and intense temperatures. It has excellent electrical characteristics as a nonconductor and as a dielectric. It can also maintain an electrostatic range while consuming minimal energy in the form of heat.

So, we literally have a large ancient city, whose authors are anonymous to history and created structures that resemble a computer board when seen from the air.

Is there an otherworldly explanation behind Teotihuacan? Is it possible that the whole city wasn’t just a city, but some sort of an energy collector? What do you think?