Pictures that seem to show a fossilized skull wrapped within the grubby Martian surface has emerged online, setting an excitement among the UFO hunters that life on Mars is or at least it was real.

UFO pursuer and a self-pronounced journalist Joe White asserts he came across the fossilized skull which according to him, is sign of extraterrestrial life on Mars.

Mr. White stated his controversial claims after analyzing images of Mars collected by the Curiosity Rover.

According to White’s beliefs, the skull measures around two feet, therefore, its alleged extraterrestrial owner would be about 15 feet high.

“This looks like a giant skull with a jawbone here and maybe an eye socket here and another here,” he says in the video.

“These to me look like teeth — can you see them? One, two, three, four, five, six. Possibly seven.

“And this looks like jawbone. So could this be another mud fossil, artefact or specimen should I say, encrusted into the mud and dried out?” 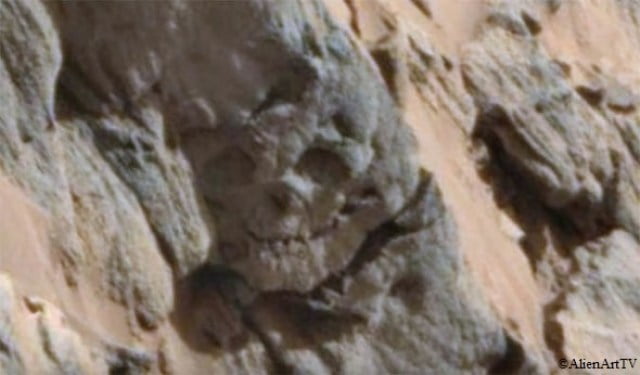 The video, ever since it appeared, is going viral with over 13,000 views. Observers are also making different comments, with one of them suggesting this discovery is quite outstanding and certain.

Another user, Lauren Piantino, believes we still have a lot of mysterious information to discover about Mars.

“That skull could that be a carving on a large wooden pole or tree on its side? There is so much in this picture. Amazing stuff,” said user George Mair.

On the other hand, rationalists believe Mr. White and his supporters ‘suffer’ from a phenomenon called Pareidolia. According to this explanation, they see the rocks in a form their minds imagine it is.

Even White says in the video that this might also be a Pareidolia case or some weird holes in the basic Martian rock.

How does it look to you?