Dubbed as Planet Nine, a still undiscovered world that may exist beyond the orbit of Pluto, this place has baffled the scientists whether our solar system hides a mysterious world in beneath. According to a new study, it likely does!

The Dark Energy Survey is a visible survey that intends to explore the dynamics of the expansion of the Universe and the growth of massive structures. Using the information provided from this survey, astronomers discovered something never before seen.

This survey is not an instrument for spotting objects within our solar system. However, it turned out to be a useful tool for discovering the previously not seen object. It has an orbit inclined by 45 degrees analogous to the planet of the solar system. It was definitely something that experts didn’t expect to see.

In 2016, Caltech researchers Batygin and Brown stated that they believe planet Nine is real.

On the other hand, David Gerdes, an astronomer at the University of Michigan and co-author of the new paper said for Quanta Magazine: “It’s not proof that Planet Nine exists. But I would say the presence of an object like this in our solar system bolsters the case for Planet Nine.”

According to the aforementioned study, astronomers stumbled upon a weird rocky object. It was as big as a dwarf planet which made the astronomers believe it was forced into orbit by the gravitational pull of another extensive world. They believe this extensive world to be the controversial planet Nine. 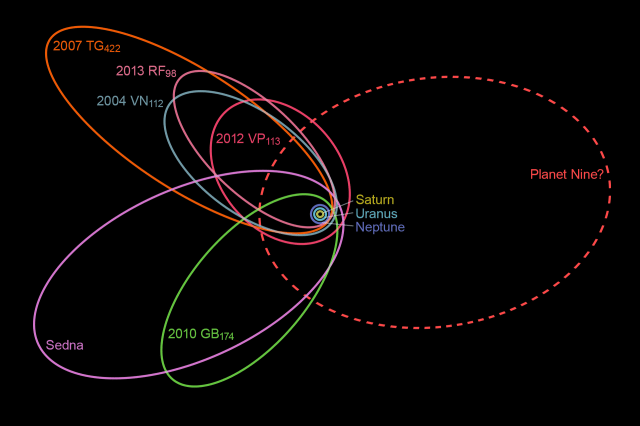 The first time planet Nine was mentioned happened in 2016. Astronomers at Caltech suggested existence of an alien world by spotting icy objects at the side of our solar system. They’ve all had something in common – a strange tilt of their orbits.

“It has a real magnetism to it,” said Gregory Laughlin, an astronomer at Yale University.

“I mean, finding a 10-Earth-mass planet in our solar system would be a discovery of unrivaled scientific magnitude.”

Caltech astronomers implied how a gravitational pull of another planet managed to modify the orbits of the trans-Neptunian objects (TNOs). Namely, this planet is ten times the mass of Earth and it locates past Pluto.

Moreover, they discovered that these TNOs had elliptical orbits which all pointed towards the same direction.

Researchers also realized that the objects had a tilt of about 30 degrees earthward. They were in contrast to the planet in which the planets of our system revolve around the sun.

NASA also made comments about the alleged existence of this mysterious world. In 2017, the space agency featured five pieces of evidence that suggest planet Nine exists.