The famous Atacama alien corpse, ever since its discovery in a leather bag behind a deserted church in the Atacama Desert of Chile in 2003, has been considered as a proof of possible alien existence.

This six-inch-long humanoid Atacama alien is a mummified skeleton for which UFO enthusiasts firmly believed it could signify the necessary discovery of alien life.

The famous Dr. Steven Greer, for whom we wrote many articles regarding the projects dedicated to UFO disclosure, also discussed the corpse.

Within his documentaries, he stated many peculiarities of the Atacama alien that divide it from a human being. Among them, he mentioned ten (instead of 12) ribs and a large elongated head.

However, scientists who performed the DNA tests on the corpse, draw different conclusions. According to them, the Atacama alien was actually an unlucky human.

Scientists from Stanford University and the University of California discovered the skeleton belonged to a human female baby that suffered from genetic mutations.

Unfortunately, the baby didn’t live long after birth, more exactly, it lived about 40 days only.

Dr. Garry Nolan, professor of microbiology and immunology at the Stanford University School of Medicine, initiated the scientific research after Dr. Greer contacted him.

He said: “I had heard about this specimen through a friend of mine, there were some extraordinary claims put forward, and I managed to get a picture of it.

“You can’t look at this specimen and not think it’s interesting. It’s quite dramatic. So I told my friend, look, whatever it is, if it’s got DNA, I can do the analysis.” 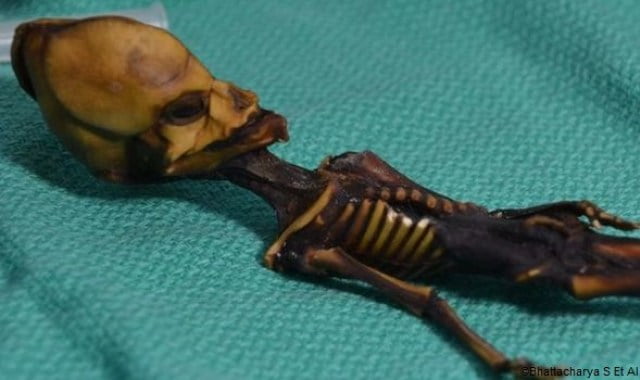 Dr. Nolan took a sample from the bone essence in the ribs in order to compare it to human and primate genomes. The tests he performed indicated the mummy was, in fact, a female human.

However, the alleged Atacama alien corpse did mean something remarkable in the history. Namely, until this corpse emerged, the smallest baby ever born was 8.8 inches. However, she is two inches shorter than the general.

Genomic results discovered multiple mutations in seven genes that individually or in combinations provided many bone malformations and facial deformities.

“Maybe there’s a way to accelerate bone growth in people who need it, people who have bad breaks,” said Dr. Nolan.

“The symptoms and size of this girl were extremely unusual. Nothing like this had been seen before. Certainly, nobody had looked into the genetics of it,” he added.

According to Dr. Atul Butte, director of the Institute for Computational Health Sciences at the University of California-San Francisco, what is really important is people not to stop analyzing the genes because they might reveal different symptoms.

“It could be multiple things going wrong, and it’s worth getting a full explanation, especially as we head closer and closer to gene therapy.

Dr. Nolan said this child, no matter if it died pre or post-birth, deserves a proper burial. Moreover, he said their obligation is to take the child back to his home country.