Hélène Smith, from Switzerland, first began to claim she had contact with aliens at the age of 33 in 1894. After that, she asserted she also visit Mars.

The real name of the woman with French nationality is Catherine-Elise Müller. For the next five years of her initial claims, she said she actually visit Mars and had alien communication.

Up to the present time, the whole concept of alien existence is so old and overtheorized.

By the 1750’s, there weren’t many educated people around Europe. However, the ones that were strongly believed in the existence of extraterrestrials. By the 19th century, many people assumed Mars, Venus and the Moon held intelligent creatures.

Similarly, Mrs. Smith, who expressed herself as a psychic, is one of the first humans to insist to be in touch with aliens and visit Mars also.

The woman drew sketches of the beings she allegedly faced and the sceneries she witnessed.

She became famous as “the Muse of Automatic Writing” by surrealists. Smith also said she is a reincarnation of a Hindu princess and Marie Antoinette.

In addition, she wrote supposed Martian speech on a piece of paper, to later translate it into French.

Her teacher was Théodore Flournoy, Professor of Psychology at the University of Geneva, who published the book Des Indes à la Planete Mars (From India to the Planet Mars) in 1899. The book involved some of her paintings of Martian sceneries and her “adventures” of her Mars visitations as well. 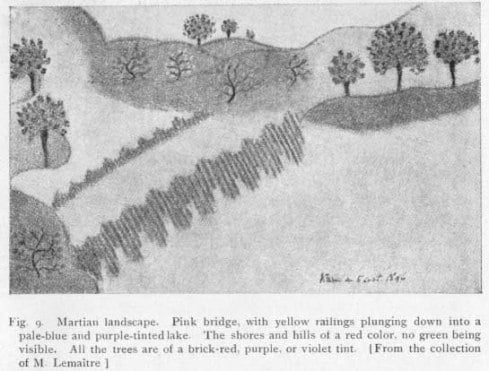 In 1900, a prosperous American spiritualist, Mrs. Jackson, appointed Mrs. Smith to proceed to document her encounters.

Regardless of her close relationship with Professor Flournoy, he explained later she was only having “infantile imaginings” and that her Martian language was imaginary.

He said the alleged Martian language was very similar to her native French and her automatic writing was from “romances of the subliminal imagination, including memories of childhood books.”

They concluded that Flournoy was good into uncovering her Martian language as an ingenious invention.

“Although it sounded decidedly foreign, frequency analysis of words and letters and an examination of the syntax convinced Flournoy that the language had all the basic structural characteristics of French, Hélène Smith’s native tongue.”

In the following examination, Professor Flournoy explained the origin of a short expression she wrote in Arabic. He said the same phrase it can most likely be found in a book owned by a Genevan physician.

“She had retained a visual image of the script and, in due time, copied it from memory in an uncertain hand.”