Mainstreams scholars teach us to believe the human technology took millions of years to make a progress. However, native culture tribes tell another story about ancient astronauts – visitors to our Earth.

There is a discussion going on about vast stones and ancient space guests, who arrived from nearly every part of the planet.

The talk originates from the small Pacific islands. However, these islands are not the only area where indigenous societies expressed a huge honor for the ancient astronauts who visited them.

It is widely believed that the sensation of the cargo-cult commenced from the Amazon forest and the Kayapo tribe.

Many discovered statues are depicting a member of the tribe wearing an actual equipment that strongly resembles a modern-day space suit.

In fact, the Kayapo tribe commemorates the Bep-Kororoti arrival every year, who is a figure that avowedly comes from the universe.

The leaders of the tribe often discussed a mysterious man who came from the Pukato-Ti mountain area. He firstly caused a feeling of fear among the group, after eventually becoming a spiritual icon.

An ancient myth says the people of the village were cleared up thanks to this strange man. He had beautiful white skin and was kind to all of them. He further taught them many precious talents and abilities. 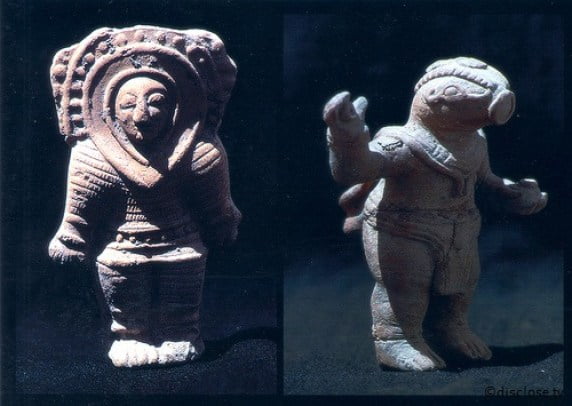 The mysterious spaceman disappeared from the tribal group surrounded by smoke, clouds and thunder.

According to the legend, Bep-Kororoti one day had an insanity outbreak. He didn’t let anyone go near him. Later that day, he escaped in the mountains, eventually vanishing in a vast explosion followed by smoke and thunder.

The blast was so strong, it destroyed the jungle and all the animals escaped, leaving the tribe with nothing to hunt for food.

Joao Americo Peret, an ethnologist, questioned the leaders of an aboriginal society in 1952. They were able to repeat the very same story.

The cargo cult’s inspiration comes from a concrete individual. Hence, many contemporary researchers began wondering what type of person would go to the jungle of Mato Grosso wearing a space suit.

Another weird thing is that this person was able to perform an actual magic. The Kayapo tribe explained this man could bring down an animal just by touching it.

The escape of the ancient astronauts among smoke and light does resemble a modern plane engine.

On the other hand, the aborigines said that the propulsion was created by branches and the ship was camouflaged in a tree.

In accordance with the legend, the spaceman sat in the special tree which disappeared after the large blast.

One of the fascinating exhibitions of the cargo cult phenomenon is visible within the Dogon tribe from Mali.

Marcel Griaule, an anthropologist from France, lived with the Dogon tribe for more than 17 years. The tribal leaders told him a story. A story that was kept as a top-secret for many years within the tribe.

The leaders said that Nommo, half-human and half-fist, organized a civilization on Earth. The Dogon were a primitive society, however, they had knowledge of the solar system.

Nommo had apparently told the leaders about the four moons of Jupiter, the rings of Saturn and spiral form of the Milky Way.

The tribe elders also had knowledge of orbits, densities, and stars in the Sirius system. Furthermore, they confirmed Sirius A, B, and C and knew other things that science had only just acknowledged.

Up until 1995, Sirius C wasn’t discovered. And the Dogon tribe knew about it hundreds of years before that.