A while ago, an ancient Egyptian papyrus was put on exhibition in the Cairo museum. Apparently, it dates back to the time of Pharaoh Khufu, 4500 years ago, and it depicts the way the pyramids were built.

A crew of French and Egyptian archaeologists discovered it along with other papyri, in the Wadi Al Jarf region.

The ancient Egyptian papyrus presents the construction process of the Great Pyramid of Giza.

These papyri reveal the life of the workers who were engaged in the process of the creation of the Great Pyramid of Cheops.

According to the dominant scholars, this pyramid’s purpose was to be a tomb for King Khufu. He is famous as the Pharaoh of the fourth dynasty.

The ancient papyrus depicts the life of a man named Merer. He was the man in charge of a team of workers who moved extensive stones from the east shore of Nile, to build the Great Pyramid of Giza.

Mainly, this Egyptian papyrus “details the daily life and way of life of the workers of the port (Wadi Al Jarf),” according to a statement from the Ministry of Antiquities.

In case you didn’t know, the pyramid is one of the seven wonders of the ancient world, built more than 4,500 years ago.

Also, a part of the ancient papyrus, the diary of Merer shows that Khufu’s ruling was over 26 years.

Before this papyrus’s discovery, we didn’t have much accessible information about the famous pharaoh’s ruling span.

Moreover, Merer was the leader of 40 Egyptian sailors. This consideration comes from the source of the Ministry of Antiquities.

The papyrus records “the work of his team, which transported limestone blocks from the Torah deposits on the banks of the Nile to the Pyramid of Cheops in the Giza Plateau.”

An Egyptian archaeologist Zahi Hawass as described this revelation as “the greatest discovery in Egypt in the 21st century.” 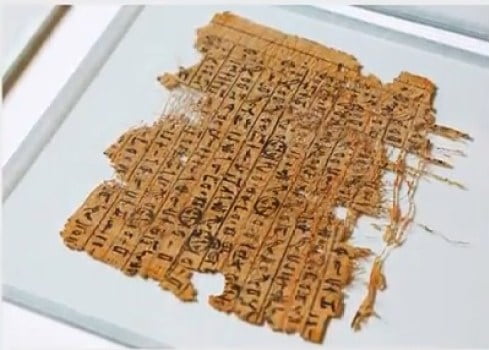 Similarly, the Egyptian papyrus offers an insight into the significant function of the port of Wadi al-Jarf in the process of the construction.

Scientists record the mining of Copper across the sea and its further transportation to Giza through this port.

The workers used copper to build instruments to cut the stone thus make it possible to move the massive blocks.

The Great Pyramid of Giza is one of the most thrilling formations that rests on planet Earth.

We only know its origins are about 4,500 years ago. However, we still don’t have enough knowledge of the way of its creation without sophisticated technologies.

The ancient papyrus or the Merer’s diary slightly offers a perception of how it was done. To emphasize, it talks about the movement of the massive stone slabs across the Nile through canals.

After this, they moved the massive stones onto special tracks and transported to the Pyramid.

It is still a mystery though, how the ancient Egyptians managed to stack these massive stones. It is also a mystery how they ended up building a structure that rose 150 meters high into the sky.