Talks circling around the famous Russian Kremlin say Vladimir Putin declared that 95% of the world leaders are not human but ‘cold-blooded hybrids‘ who are ‘members of an ancient cult’.

Moreover, he said that he is not one of “Them” even though they allegedly tried to seduce him to become part of their cult. He probably meant the Reptilians.

Did Putin just characterize the world’s most powerful politicians as cold-blooded hybrids?

Putin spoke in a protected area, with closed doors, in his home city of St. Petersburg. He preached in front of highest class government people, answering questions about the Panama Papers exposure.

The Russian President said that behind the event stands the government of the US, their spy agencies and George Soros.

Some close people to the president said that Putin banged his hand on the table shouting: “George Soros, you silly dragon, this is war.”

He further took a pledge to incline punishments against Soros’s Open Society.

Thereupon, top assistants started asking him what he suggests with the word ‘dragon’ (an unusual word in Russian). He breathed heavily and started explaining how the ruling class in the world is not simple but rather obscure and scary. 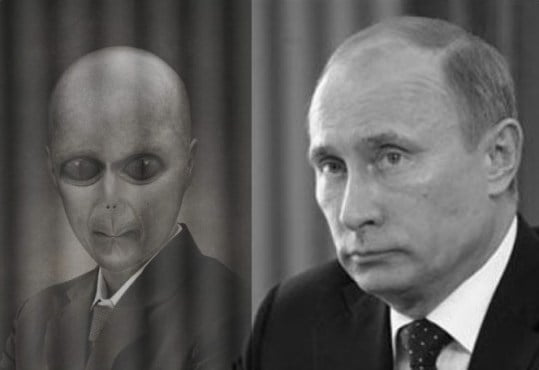 There were some efforts for Putin to stop sharing knowledge about the topic. However, he continued saying he has close experience with the type of the affairs they’ve had been part of.

“The evidence, ancient and modern, is enormous,” he said.

Putin said that these leaders have been manipulating humankind to make it “unconscious”. He further added that to succeed in this, they use programming by media and politics.

He pointed out that the perfect example of this programming is the recent Panama Papers exposure.

The world’s leading class have tyrannical restraint and control over our food, water, and air stocks. Henceforth, they are eagerly silencing the crowded mass.