The US Navy was intending to place 10,000 people on the Moon in the early 1970’s, as part of a secret lunar agenda established through the NASA’s Apollo mission.

William Tompkins, a top aerospace designer who worked for NASA, said that this secret Navy plan suffered a collapse during the Apollo 11 mission when Armstrong and Aldrin confronted a group of threatening extraterrestrials.

Tompkins published his claims and attitude toward the event in his autobiography, Selected by Extraterrestrials.

During the time of the Moon landing, he worked for TRW, an aerospace corporation famous for constructing the first NASA satellite, Pioneer 1.

Tompkins was one of these employees from July 1967 until March 1971. His main role was dedicated to the design of the Launch Operations Center at Cape Canaveral, Florida.

Earlier, he was working for 12 years in the Douglas Aviation Company. His impressive designs for the Apollo mission fascinated Dr. Kurt H. Debus.

In July 1962, Debus become the first Director of NASA’s Launch Operation Center (renamed the Kennedy Space Center after the JFK Assassination). He maintained this seat until he retired in November 1974.

In 1963, Dr. Debus named Tompkins to a Working Group for the next Launch Operations Center. The two carried many private meetings, discussing the future of the Apollo program.

The Apollo Moon landings were apparently only the first level of the grand four-level project.

Similarly, level 3 was to put bases on Mars and other planetary masses.

Finally, the level 4 was to put manned Navy bases in 12 nearby star systems.

To back up his revolutionary claims, Tompkins contributed various documents in his autobiography. The first document is a 1963 Douglas Aviation Company study of the launch vehicles in the secret NOVA program. 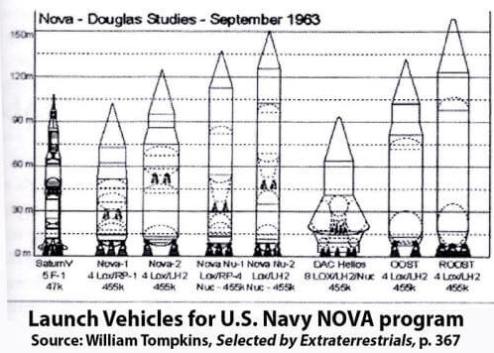 The second document is a Memorandum from the Douglas Aviation Company from April 15, 1963.

Namely, it serves as proof of Tompkins’ selection by Dr. Debus to the Launch Operations Center and the designs he was working on for NASA. 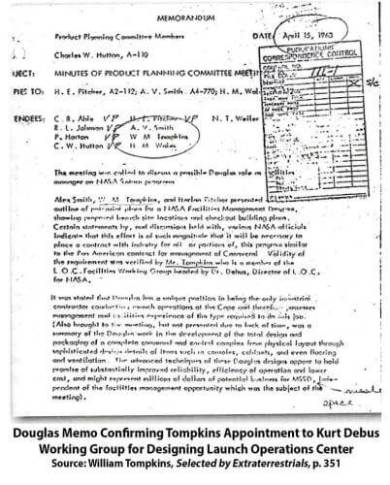 Tompkins explains what he managed to design for the Apollo mission and NOVA:

“As Engineering Section Chief, I conceived dozens of missions and spaceships designed for exploratory operations to the planets that orbit our nearest stars.

“I designed a station to be built on Mars, massive NOVA vehicles and equatorial launching facilities. I also designed multiple 2,000-man military bases for our Moon.”

During the Apollo 11 mission in July 1969, Tompkins claims he was in the NASA Launch Operations Center at Cape Canaveral as part of a large TRW group.

He declares that cameras from the Apollo Lander gave a live feed of what Armstrong and Aldrin saw with their own eyes.

Furthermore, he describes how Armstrong and Aldrin met a flotilla of extraterrestrials that were close to the Apollo Lunar Lander.

“There are other ships here, they are enormous. The public did not hear that statement or see the massive alien starships.

Armstrong panned his camera in a 360 degree motional all around the crater and the CIA then classified the information as way above top secret.”

Tompkins drew a rough image of what he testified on the Apollo live feed camera together with other TRW and NASA staff. 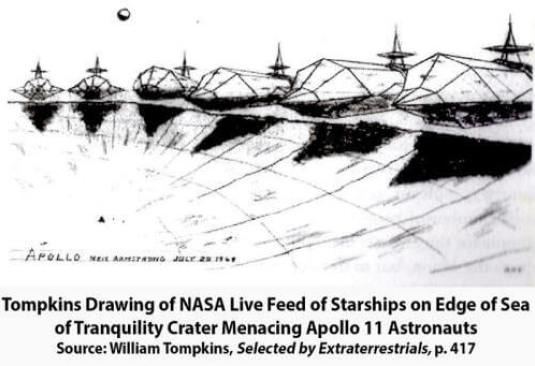 Allegedly, this extraterrestrial performance put an end to the secret lunar Navy plan. The action stopped the plans of constructing a manned Naval Base on the Moon.

“The Extraterrestrials put up their “NO TRESPASSING” sign but allowed us to make several other additional Apollo landings to pick up a few rocks and play in the sand,” writes Tompkins.

The claims of Tompkins are rather compatible with the HAM radio intercepts and the claims of former NASA worker Otto Bender as well.

The signal came with the following message, which NASA concealed from the public:

Apollo 11: These babies are huge, sir… enormous… Oh, God, you wouldn’t believe it! I’m telling you there is other spacecraft out there… lined up on the far side of the crater edge… they’re on the moon watching us.

In a 2012 blog post, Dr. Stephen Greer said he talked with relatives of Armstrong and Aldrin who knew the truth of what the astronauts witnessed on the moon:

“Close friends and very close family members of both Neil Armstrong and Buzz Aldrin have separately told me that indeed there were numerous, large UFOs around the crater where the Lunar Module landed and that these were seen by both Armstrong and Aldrin.”

By blocking the US. Navy establishing its plan, the extraterrestrials stopped he NOVA program in July 1969.

It would take the US. Navy more than a decade before it could finish the building of its first antigravity spacecraft as part of its Solar Warden program.