When you think about the swastika, the first thing that comes to your mind is the most hated man in history – Hitler and the millions of murders he was engaged in it. What you probably didn’t know is that this symbol was used thousands of years before him. You wonder how?

The Hindu people and the Buddhists in India and the rest of the Asian countries had the swastika thousands of years before. Up until now, you can notice this compelling symbol on many of their temples, books etc.

Ancient Greeks were also using the swastika symbol. Namely, it can be seen on the remnants of ancient Troy which existed 4,000 years ago. Nordic societies and even ancient Christian used the swastika as well.

But the real question is how come this symbol be so important and why did the Nazi dictators decide to adopt it?

The word swastika has a Sanskrit root. It originally means ‘It is’, ‘Well Being’, ‘Good Existence, and ‘Good Luck’.

However, different countries recognize it by a different name, such as, ‘Wan’ in China, ‘Manji’ in Japan, ‘Fylfot’ in England, ‘Hakenkreuz’ in Germany and ‘Tetraskelion’ or ‘Tetragammadion’ in Greece.

A Sanskrit scholar P. R Sarkar had defined the word deeper as ‘Permanent Victory’. Moreover, he explained that any symbol could be interpreted as good or bad, hinging on how it’s described.

Therefore, in Hinduism, the right-handed swastika is a representation of the God Vishnu and the Sun. The left-hand swastika, similarly, represents Kali and Magic.

The oldest swastika in the world was discovered in Mezine, Ukraine. It was engraved on an ivory statuette which dates back amazing 12,000 years.

Furthermore, old civilizations that also used this symbol were the Neolithic cultures in Southern Europe (Serbia, Croatia, Bosnia and Herzegovina) around 8,000 years ago.

When it comes to Buddhism, the symbol of swastika depicts prosperity and good fortune. Having a straight link with Buddha, you can spot it on the feet and the heart of his statues.

The swastika also appears on the walls of the Christian catacombs in Rome. It is next to the words ‘ZOTIKO ZOTIKO’ which means ‘Life of Life’. 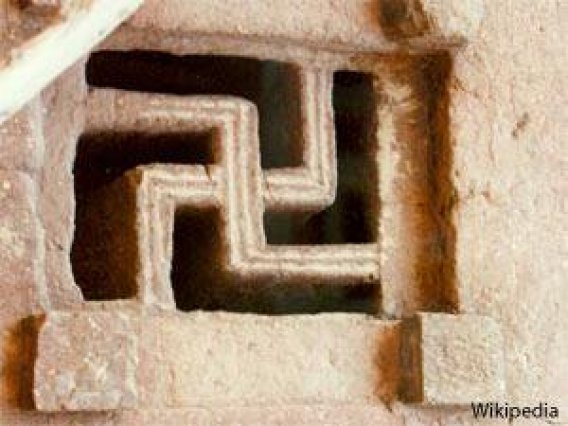 The Phoenicians also used it to symbolize the Sun, while priests considered it to be a holy representation.

We can conclude that numerous different cultures used the same symbol and every one of them had a similar interpretation of it. It is very ironic how this symbol now is an image of resentment.