A retired Air Force worker claims he holds strong evidence on the 1980 UFO event the Rendlesham Forest. He said he saw “some type of superior intelligence” that could “change size and shape”.

The colonel named Charles Halt gather statements from air traffic controllers who were on duty the due day close the Bentwaters Royal Air Force Base in the UK.

They told him they saw a UFO performing amazing aerial movements. They didn’t speak up until their retirement because they were scared.

The military personnel on duty in the base RAF Bentwaters and RAF Woodbridge witnessed a fast triangle UFO in the field of Rendlesham Forest. Same encounters had resumed the next night again.

Halt, who was a deputy base commander at Bentwaters, underwent a series of inexplicable lights which involved a mysterious craft moving through the trees and dropping a hot matter.

Along with a tape recording, Halt also filed a report, describing a laser-like light one of the UFOs emitted as his men were observing. 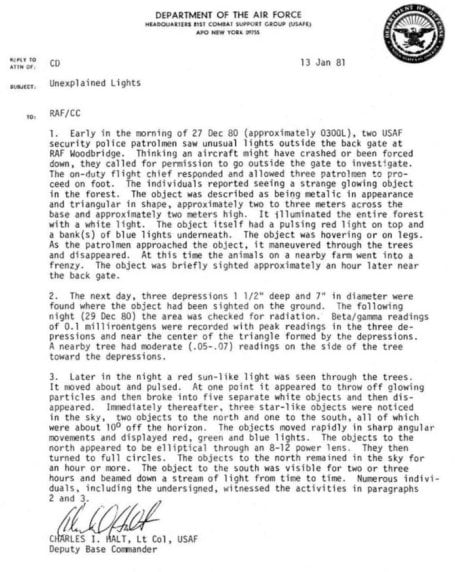 Halt told The Huffington Post that what he and the others saw in the Rendlesham forest was beyond their imagination.

“The military has nothing to do with it, other than the cover-up, but I can tell you, there is some type of superior intelligence that can change size, change shape, do funny things. What I saw, I’m firmly convinced, didn’t have anything that we know or could relate to, inside it. Maybe they’re not a being as we know, maybe they’re an entity that just has intelligence, and we just can’t relate to it.”

Moreover, Halt explained how after many years he managed to retrieve some sworn statements from air traffic controllers who were witnesses at the same time.

“They saw the object go across their scope — a 60-mile scope — in two or three seconds. Thousands of miles an hour,” he told the BBC. “It came back across their scope again, stopped near the water tower. They observed it. They watched it go over into the forest where we were.”

A few years after the Rendlesham event passed, the air traffic controllers retired. Then, they decided to tell Halt everything they detected that night.

“They told me that they knew anytime an air traffic controller reported a UFO, they got de-certified. So they said nothing.”

Charles Halt recently blamed the US government for concealing important UFO data. Furthermore, he claims a presence of a top-secret bureau dealing with extraterrestrial activities.

Halt told the HuffPost that there is a contract civilian agency in charge of everything. He alleged this agency consists of former military and top-notch scientists.

However, his biggest frustration is the years of lies and misinformation about the Rendlesham incident. This includes the disappearance of essential files concerning the case.

In 2011, the UK declassified thousands of UFO files, but the ones connected with this one weren’t among them.

Halt said: “It doesn’t surprise me at all, because they were probably taken from them by somebody, or sent somewhere by direction. Trust me — that’s the way it works. It’s very disappointing on one hand, and it’s also frightening. Who knows what else is going on?”