In the distant year of 1492, Christopher Columbus and his group spotted the shores of San Salvador, ending their 70-day travel. However, a few hours earlier, another sighting has happened which marked the eerie question: was the discovery of America supervised by a UFO?

A large number of researchers believe that extraterrestrials have been witnesses of our development as species all along.

This theory, in fact, implies that ever since the humankind appeared, UFOs were there too.

Hints of their existence are visible in 10,000-year-old cave paintings in India, Greek and Roman writings and artistic works.

The history took an effort to mark them somehow which means they were very important to us.

Nobody expected a UFO mention in the Journal of Christopher Columbus. However, his family regarded this as an important event that had many notes in his successors’ writings.

Thee pilots observed the North Point and found that the needles turned a full point to the west of north. So, the mariners were alarmed and dejected, and did not give their reason.

But the Admiral knew, and ordered that the north should be again observed at dawn. They then found that the needles were true. The cause was that the bright star makes the movement and not the needles.”

This reference of a bright star showing movements on the night sky is very unusual by itself, but when coupled with the following events, it gives the whole picture.

Christopher Columbus later revealed to his close relatives that they’ve seen the bright star other nights too.

Moreover, he said the star was the reason for him and his crew to doubt something otherworldly is observing them.

The bare fact the sailors were more apprehensive five hundred years ago paints the picture of how much the sighting was disturbing for them.

At 10 p.m. on October 11, Columbus was guarding the deck of the Santa Maria. His crew’s spirit was already down and the men already wanted to sail back to Spain. While thinking what to do, a peculiar incident disrupted his thoughts.

“The admiral, at ten o’clock, being on the deck, saw a light glimmering at a great distance, though it was so uncertain that he could not affirm whether it was touching down or not.

He called Pedro Gutierrez, a gentleman of the king’s bed-chamer, and said that there seemed to be a light, and that he should look at it.”

In the course of the same night, the light vanished and reappeared many times, while changing its altitude “in sudden and passing gleams.”

Other sources claim the light was first detected below the waves and later it climbed into the sky.

Ufo enthusiasts immediately presumed Christopher Columbus had a UFO encounter during the trip that marked his life.

Columbus’s discovery was so big in a historical way, it gave the theories even more strength to believe in.

Namely, the expedition of Columbus could have been closely observed by an extraterrestrial craft for mysterious reasons. 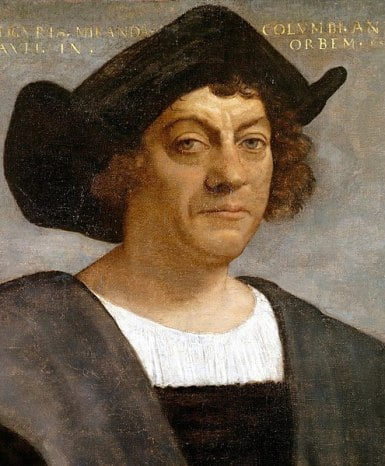 On the other hand, this theory indeed very controversial so the skeptics debunked it right away.

The huge number of UFO sightings, however, is proof that sometimes the skeptics are not right. There can always be another explanation, beyond rationality.