According to a Russian geologist, the traces on the picture above are left by ancient vehicles which were owned by an advanced civilization as old as fantastic 14 million years.

The world is overflown with old texts that mention giants as inhabitants of Earth in the distant past. Were they the ones who made these marks?

Although many researchers firmly deny this possibility, there are others that on the other hand, strongly believe Ancient giants were part of our planet, leaving many traces to prove their existence.

Russian geologist Alexander Koltypin believes these strange traces in the Phrygian Valley, Turkey, have a rather astonishing origin.

He thinks an advanced civilization, between 12 and 14 million years ago, made them with their ancient vehicles.

“We can assume that ancient vehicles with “wheels” were driven into the soft ground, perhaps a wet surface,” stated Koltypin.

“Because of the great weight of these vehicles, they left behind very deep grooves which eventually petrified and turned into evidence.”

Geologists are already aware of this kind of wonders. That is because they have discovered petrified footprints of dinosaurs kept similarly.

Accompanied by three other colleagues, he went to the archaeological site in Anatolia, Turkey, to examine the weird marks.

When he came back from the journey, he described what he saw. He said he observed “petrified tracking ruts in rocky tuffaceous made from compacted volcanic ash deposits.”

“All these rocky fields were covered with the ruts left some millions of years of age. We are not talking about human beings,” said Dr. Koltypin.

“We are dealing with some kind of cars or all-terrain ancient vehicles. The pairs of ruts are crossing each other from time to time and some ruts are deeper than the others, he further added.

This scientist is one of the rare prominent scientists who take an initiative when it comes to the science alternation.

According to him, archaeologists need to be braver and explore the topic which could change all mainstream teachings.

“As a geologist, I can certainly tell you that unknown antediluvian [pre-Biblical] all-terrain vehicles drove around Central Turkey some 12-to-14 million years ago,” stated Koltypin.

Furthermore, he believes this civilization existed a long time before the common humankind inhabited Earth. In other words, he believes they were totally different from what we like to say ‘modern’ people. 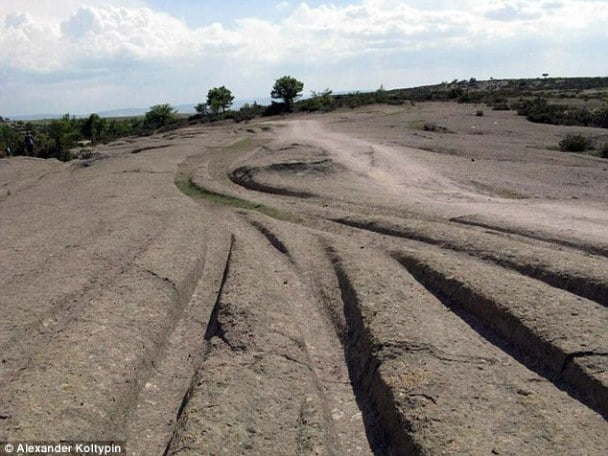 Koltypin is the only archaeologist which employed a revolutionary way of thinking regarding these markings and many other similar discoveries.

They claim these ancient vehicles traces are one of the biggest proofs for the existence of a highly developed civilization.

“There was no comprehensible system for the tracks but the distance between each pair of tracks ‘is always the same.”

As reports say, the highest depth of a mark measures around three feet. In addition, on the sides of the ruts, there are horizontal scratches which look like a remnant from the edges of the shafts of ancient vehicles’ wheels.

Is it possible we are being fooled by the mainstream science? Dr. Koltypin might have right about what he says and our history might be wrong. Are scientists to afraid to change it? What do you think?